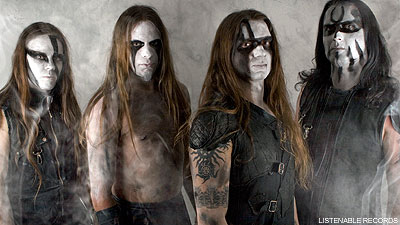 Poland's death metal warriors Hate will embark on a U.S. tour this May, joining Hypocrisy, Scar Symmetry, Blackguard and Swashbuckle on the trek. Hate, known for live performances so tight they border on clinical, are working on a new album for Listenable, due out in 2011.

"We've always attached much importance to playing live shows," cleverly-named guitarist/vocalist Adam the First Sinner said. "We simply love the adrenaline and watching how people react to what we give them. The stage is a place where you can feel the very essence of your songs, where you can find out if they're good or 'not so good.'"

ATFS said that the band plays new songs during their live sets to "test" them out and decide if they are worth of being put to tape and recorded. It's certainly an unorthodox, fluid songwriting method and makes for "custom" Hate shows. "We work on them again, make some rearrangements and play them on shows again," he admitted. "This way, we permanently create new songs that we later put on record. It's a strategy that I first thought of in 2007 when we played a few tours in a row and had very little time for actual songwriting. The material that we're working on now is certainly a piece of solid metal. We'll present at least two new songs on this tour."

The band is prepping for the tour, but they are also dealing with the aftermath of the plane crash that decimated the Polish governmental infrastructure, claiming the life of president Lech Kaczynski and several other high-ranking Polish political officials.

"It was a tragic accident that took life of so many important and noble people," ATFS said, reflecting on the accident which occurred on April 10. "It took place exactly on the 70th anniversary of murders in Katyn, just a few kilometers from that damned place!" The historical significance is ironic, with ATFS saying, "70 years ago in Katyn, near Smolensk, Soviet Special Service murdered over 15,000 Polish officers that were held captive in September 1939.

"They were the very elite of Polish army at that time. Now, in this tragic plane crash, Poland lost some very important people together with the President and his wife. It's a strange coincidence and, of course, it's a blow for everybody in Poland, no matter if one supported his politics or not. People gather together these days to manifest their patriotism and express their grief."

Despite being deeply troubled about the political situation at home, the band is keeping focused on the positive and coming to America. "Actually, we're totally psyched about it," ATFS said. "We're aware that we have some dedicated fans in the U.S., and we're looking forward to meeting them. Also, U.S. music market is so important that we cannot make real progress now without playing tours in North America." The band toured three times in support of 'Morphosis,' canvasing Russia, Ukraine, Brazil and Mexico, but America remains in their sites. "It's high time we toured U.S. and spread Hate there, too," he finished.