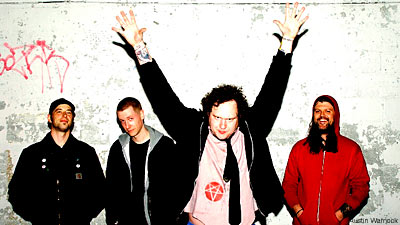 Technically not a full album from the Indianapolis noise rockers Racebannon, but doing things the traditional way has never been their way -- the bar was set high with the gut pummeling rock opera 'Satan's Kickin' Yr D--- in' back in '02, so why not release a full-blown DJ 12-inch while a new album is getting polished? It's loud, it's got some grind, a little punk tickle, and it makes the eyes hurt with a listen -- that's the Racebannon way.

'Wrap the Body' is a collaboration with Jilly Weiss (We Are Hex). Included on this limited run of 500 are remixes by longtime friends Yea Big, Kid Static and Stak.

As a song, 'Wrap the Body' may be the a little peak at the band's forthcoming sixth album, 'Six Sik Sisters,' which was recorded last year at God City with Kurt Ballou behind the knobs. 'Wrap the Body' comes out June 15 via Joyful Noise.