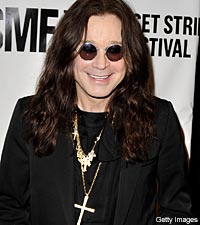 Metalheads will be dreaming of a black Christmas if this news is indeed true. Rolling Stone has reported -- in its most recent issue with the Rolling Stones on the cover, again -- that Ozzy Osbourne will be releasing a collection of tunes to incite metallic holiday cheer next year and that it will be called 'Black Christmas.'

Ozzy even hinted that there will be a TV special component to the Christmas album. A Christmas album for the Prince of Darkness? Stranger things have happened.

Sharon Osbourne, Ozzy's wife-a-ger, told the publication that she's discussed the idea with Ozzy and that "he's trying to forget it actually exists."

The Ozzman's publicists could not confirm or deny that these plans are solidly in the works.

Can you imagine Ozzy covering 'It's Beginning to Look a Lot Like Christmas,' 'Rudolph the Rednosed Reindeer' or 'Silent Night'?