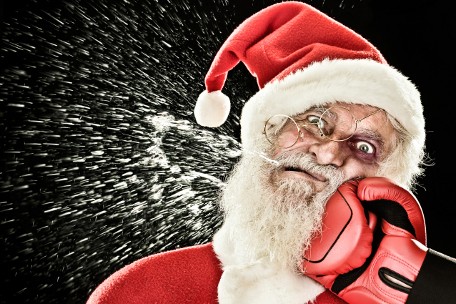 On the surface, punk rock is supposed to be anti-materialistic, anti-dogma and anti-tradition. That's all fine and good, but even punkers can't deny when the Christmas spirit hits them like a sled load of reindeer.

Punks might looks pretty gnarly with all those piercings and crazy hairdos, but they have hearts too. They also need some dough in their pockets at the holidays to buy the love of their life a new spiked dog collar or their best bud that Exploited box set. Below is a list of Holiday oriented X-Mas punk rock tunes. Some were done purely in the holiday spirit. Some were obviously made to make a little scratch. Nonetheless, they all make for a honey of a holiday punk playlist.

So put on your ripped up, safety pinned reindeer sweater and proceed to chug as much booze laced eggnog as you can handle, because here comes ten of the best punk holiday tunes of all time.

When this 45 was initially released in 1977, people thought it was the Sex Pistols cleaning up cash-wise on the holiday season. Turns out it was just fly-by-night L.A. punks The Ravers getting in on the novelty action. The lyrics to this thing are beyond cringe-worthy, but you gotta admit it's a driver of a tune.

'A Merry Jingle,' The Greedies

Now here's the Sex Pistols cashing in on Christmas! Well....one half of them at least. By X-Mas 1979, Johnny Rotten was exploring the boundaries of music in Public Image Limited and Sid Vicious had sadly passed on. Which left Pistols guitarist Steve Jones and drummer Paul Cook free to hook up with Phil Lynott, Brian Downey and Scott Gorham from Thin Lizzy to record the crassest mishmash of carols the world had ever heard. This footage of the whole team lip synching the tune on British TV shows they certainly had the holiday 'spirits' in them that day.

If L.A Punks The Dickies are known for anything, it's for their flare of covering a sacred chestnut and making it their own. Check out their covers of Black Sabbath's "Paranoid" or The Moody Blues' "Nights in White Satin" for proof. For Christmas 1978, they decided to tackle this ancient Christmas carol and adhere it to their buzzsaw pace.

'There Ain't No Sanity Clause,' The Damned

It took until X-Mas 1980 for these British pioneer punks to release a holiday related single. It sounds to us that they were just bidding their time, because this track is a scorcher from beginning to end. Co-penned by Giovanni Dadamo, one of the first UK musical scribes to write about punk in a respectful and erudite way.

L.A hardcore punks Fear and their trash talking leader Lee Ving minced no words back in Christmas 1982 when it came to their feelings about the holidays. 47 seconds of sheer, unbridled spite.

Many accused Boston straight edge band SSD of being humorless bruisers. If that's the case, how do you explain this joyous rendition of an old X-Mas favorite? Originally released in 1983 on the compilation LP A Very Boston Rock Christmas, where the band strangely shared vinyl space with Beantown proto-indie rockers The Del Fuegos and Christmas.

'Step Into Christmas,' The Business

The Business were always the band out of the UK Oi! scene who seemed to have a better sense of humor than the rest of their burr headed brethren. Here's the proof with their take on this Christmas ditty originally written and performed by Sir Elton John. From the excellently titled Bollocks to Christmas compilation released by Secret Records in 1981.

This 45 was the one and only release by these Welsh punkers back in 1983. Although the sentiment of this track is pretty goofy, there's no denying it being a classic ripper that you could line up against any of your UK82 favorites.

The cover of this traditional Christmas classic by these early '80s German punks always threw us for a loop. By the twang of the guitar and the urgency of the drumming, you'd think this was done by some beach punk band from Southern California. Killer. From their second LP, Yankees Raus, from 1982.

'Merry Christmas (I Don't Want to Fight Tonight),' The Ramones

What can we say? The classics never grow old. May Johnny, Joey and Dee Dee all sleep in heavenly peace.

Tony Rettman is a freelance music journalist whose work has appeared in The Village Voice, Vice, Philadelphia Weekly, Arthur, Swindle, Signal to Noise and Mean. His 2010 book, Why Be Something That You're Not: Detroit Hardcore 1979-1985, is a must-read for any fan of heavy music and can be purchased on Amazon
Categories: News
Comments
Leave A Comment
Funko Pop! Dolls of Eddie Munson in ‘Stranger Things’ Metallica Scene Coming Soon
The Biggest Rock + Metal Moments of 1973
Fraudster’s Get Rich Quick Scheme – Steal Sanguisugabogg’s New Album + Sell It on Bandcamp
Slipknot Debut Creepy AF Video for New Song ‘Bone Church’
The 10 Best Live Shows Frank Iero (My Chemical Romance, L.S. Dunes) Has Ever Seen
23 Bands Announced for Furnace Fest Including Four Reunions
Why Everyone Should Pay Attention to Falling in Reverse’s Ronnie Radke, According to Avenged Sevenfold M. Shadows
Artists Newly Eligible for Rock Hall in 2023 Who Weren’t Nominated
Only One Artist Beat Sleep Token on Spotify’s Top 50 Viral Songs Chart