With total respect to Witchcraft, Deftones and Cattle Decapitation, who recorded albums that list highly on my year-end favorites (especially Witchcraft's mighty Legend), Noisecreep wanted straight-up progressive albums from me, so prog I give!

This is a list of the ten best progressive rock and/or progressive metal albums of 2012 to my prog-hungry ears. I mean, real prog, and by real prog I mean rock/metal that has a restless drive to explore new things and not regurgitate what came before. I'm not interested in clones. Then again, "everything plus the kitchen sink" avant-garde rock/metal can be just as unlistenable as the latest Unitopia album or whatever. Try these albums on for size if you haven't already! 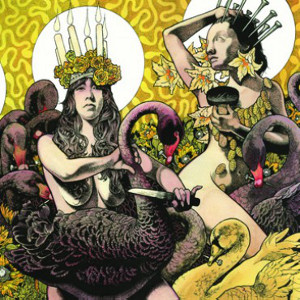 I wasn't tuned into this band for their first couple albums. I thought they were just your average sludge band. They're weren't then, and they certainly have nothing to do with the s-word now. I stand corrected and reprimanded. Yellow & Green is an album of uncommon maturity, written and performed by a band that has found just the right chemistry to pull off an album of this magnitude. Sophisticated modern rock, masterfully written, packed full of amazing and interesting tunes with just enough twists, turns and compositional ingenuity to appeal to a wide range of listeners. Suddenly they're a band to utter in the same breath as Dredg, Coheed and Cambira and Jupiter-era Cave In, Who knew? We're all very grateful they survived that horrible bus crash. Yikes.

Key songs: "Take My Bones Away," "Cocainium," "Foolsong"/"Collapse" -- those last two have to be put together, they feel like twins. 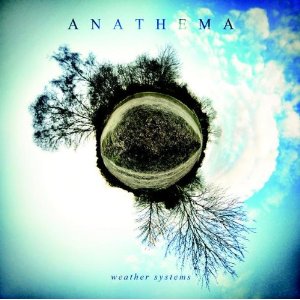 Despite a lull that happens from song 2 to 5, this is still a super-solid offering from Liverpool's second greatest-ever band (in my world they're at least as good as the Beatles). The best stuff here is what Anathema does best: raw, naked, painfully open emotional music, exploding with color and overridden with hope. There's no other way to describe the music; it can wilt even the most hardened heart. One thing's proven by nine-and-a-half-minute centerpiece "The Storm Before the Calm": drummer John Douglas really needs to write more songs for this band. His contributions are always high points. If you worship Pink Floyd and Porcupine Tree and don't know Anathema: go here. Now.

Key songs: "Untouchable, Part 1," "The Storm Before the Calm," "The Beginning and the End." 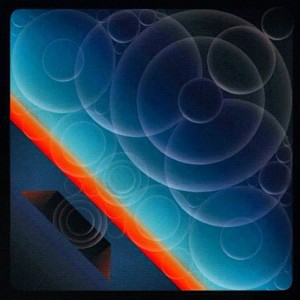 The jarring, unsettling, fractured opener "The Whip Hand" sets the stage: it's The Mars Volta saying "We've never taken the easy road, and this one's going to be one of our most difficult." Noctourniquet found the band coming off an unusually long break (three years...an eternity for their prolific selves), refreshed and reoriented. Meshing mountain-size, difficult songs and more tranquil, atmospheric epics, and sometimes fusing those approaches into one, there are infinite details to study and enjoy here...just as with every other MV album, yet this one's a bit more crooked and deliberately distant than the others. Until you start figuring it out, and that's when the real rewards come. 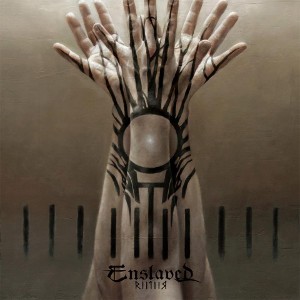 Another year, another Enslaved album. And while we'd be tired of most bands that crank it out like this, Enslaved, like fellow Scandinavians Opeth, keep the quality consistently high. And the quality of RIITIIR is even higher than previous albums, and probably their strongest since 2004's Isa. Sophisticated "extreme" metal, even when they go off into non-metal territory on the mightily cosmic "Forsaken," half of its 11 minutes finding the Norwegians time-travelling to psychedelic Krautrock lands of old.

Key songs: "Death in the Eyes of Dawn," "Storm of Memories," "Forsaken" 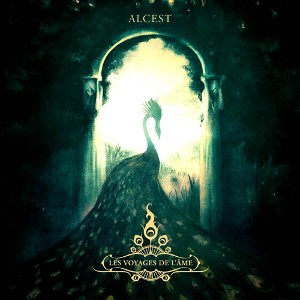 As adulterated and mellow as metal can get while still being metal, this French duo's third full-length doesn't reshape the wheel of their previous designs, but it does offer their strongest and most consistently alluring batch of songs yet. Layer upon dreamy layer of Neige's tranquil guitars and wistful vocals; Winterhalter's focused and nimble drum work; every now and then a harrowing scream from the distance and thunderous metalstorms reminding of this band's black metal roots.

The Void, Beardfish (Inside Out) 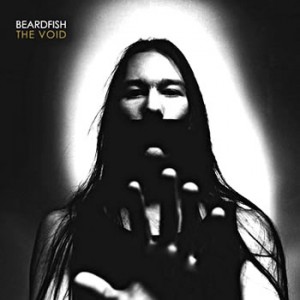 Once a retro-prog band (and a very good one!), these prolific Swedish youngsters are already on their seventh album, and The Void reveals a more metallic, modern and urgent Beardfish than before. Every track is key, unlike past albums where standouts stood tall amongst less memorable compositions. The presence of multi-instrumentalist, vocalist and songwriter Rikard Sjöblom dominates, but the other members of the band, same as they've always been, have plenty of room to shine. Magnificent stuff.

Key songs: "Voluntary Slavery," "This Matter of Mine," "Seventeen Again"

The Parallax II: Future Sequence, Between the Buried and Me (Metal Blade) 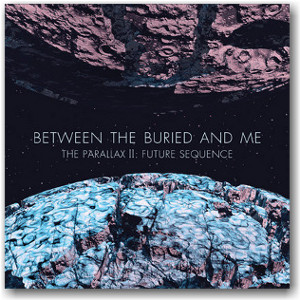 On the absolute cutting edge of all the things modern progressive metal can be, this North Carolina band don't so much uncover virgin soil as make previously travelled roads more navigable with Future Sequence (part one was last year's Hypersleep Dialogues EP). Long songs that don't feel long, hybridizing a variety of different styles, metal and otherwise -- this is ambitious stuff that can be exhausting to absorb all at once (especially with albums this long) but you'll get your money's worth. Speaking of getting your money's worth, buy the physical version! Best packaging of 2012, along with Coheed and Cambria's beautiful The Afterman: Ascension, another fine modern prog/metal piece of work, visually and musically. 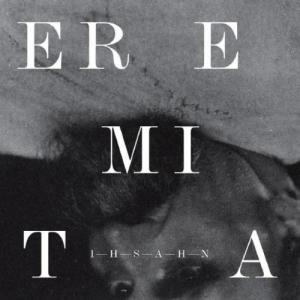 The onetime Emperor leader delves further into the places traveled on predecessor After, making it all darker, weirder, and maybe better. Exquisite extreme metal sophistication, ranging from impossibly dark to surprisingly delicate. The multi-talented man is aided this time by Devin Townsend, Jeff Loomis (ex-Nevermore), Shining saxophonist Jørgen Munkeby, and members of Leprous (who have an album coming out in 2013 that will very likely make this list next year). Ihsahn's sweeping orchestral style has never been more focused, and it's all very digestible despite the complexities.

Key songs: "Arrival," "The Eagle and the Snake," "Something Out There" 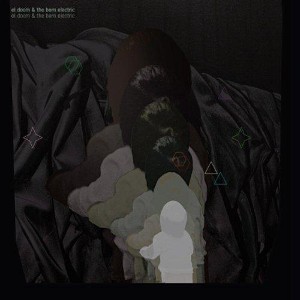 Newcomer of the year, this Norwegian band merge bong-huffing vibes, the smell of old Uriah Heep vinyl, alt-rock stylings (back when it was truly "alternative"), prog rock grandiosity, swirling analog keys, thunderous drums and a charismatic vocalist for a sound that's fresh, even if built of familiar ingredients. Until Witchcraft came along and tied up spots 1 through 5 for song of the year, "Fire Don't Know" was in the running for number one. Some of the arrangements feel a bit haphazard, making you wonder what godliness this band would produce if Rick Rubin stepped in to tighten things up a bit. I'd offer any amount of money I could muster to make that happen. Or maybe they'll make that leap themselves for album #2. 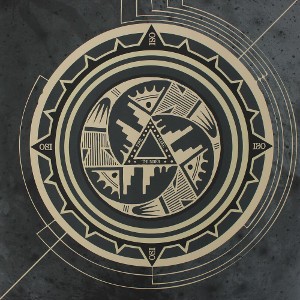 While not their best album (that's a tie between Blood and Free), Fire Make Thunder is sort of like the Alcest album, in that it doesn't do anything new yet totally satisfies all the same. And they can get away with that, because there is no other sound quite like OSI. Between Kevin Moore's expert keys/samples/effects wizardry and Jim Matheos's expanding mastery of stealthy guitar layering, you've got two prog metal veterans forming a braintrust that's much more than a side project by now (this is the band's fourth album). Moore delivers some interesting lyrics with his signature understated vocals, and final track "Invisible Men" is possibly the definitive OSI track, gathering everything that's great about this band into one 10 minute package.

And yes, I love Rush. Clockwork Angels was very good, but was it really the second coming or "best since Moving Pictures" so many people have hailed it? The disappointment of 2012 goes to Van Der Graaf Generator's unlistenable Alt, a band who previously did very little wrong in their decades-long career. Sure to make this list next year: Voivod's Target Earth and that Leprous album.

Jeff Wagner is the former editor of the influential Metal Maniacs magazine and the author of Mean Deviation: Four Decades of Progressive Heavy Metal, an exhaustive history on the sound and its various subgenres.