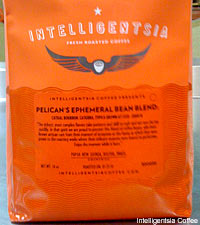 When recording albums, booking shows and printing T-shirts isn't enough to pay the bills, it's time to find other fiscal outlets, be they movie soundtracks, video game placement or something else entirely. Some bands opt to market specialty products, like custom guitar lines, liquor, hot sauces and fine grown coffee.

The latest group to enter the coffee sweepstakes -- in the wake of Kiss and Dethklok -- are Chicago post-metallers Pelican, who have created a co-brand with Intelligentsia Coffee called Pelican's Ephemeral Bean Blend.

"The richest, most complex flavors take patience and skill to craft and are over far too quickly," said the group of their savory brew. "In that spirit, we are proud to present this blend of coffee beans, who have known artisan care from their moment of inception at the farms at which they were grown to the roastery where their delicate nuances were honed to perfection by skilled craftsmen."

Sounds enticing. After all, nothing counteracts 45 minutes of droning instrumental metal like a hot cup of premium coffee. Problem is, Pelican are relying way too much on niche marketing. Pelican's Ephemeral Bean Blend isn't just hard to find -- for anyone without a ticket to their March 12 show with Pinebender and Follows, it's impossible. The band will sell bags of their pick-me-up blend exclusively at the show, after which the brand will be as old as yesterday's coffee grounds.

The Pelican coffee venture is actually a promotional effort to celebrate the vinyl release of the band's fourth album, 'What We All Come to Need,' which was originally released on CD Oct. 27.

Said the band, "Enjoy the moment while it lasts."