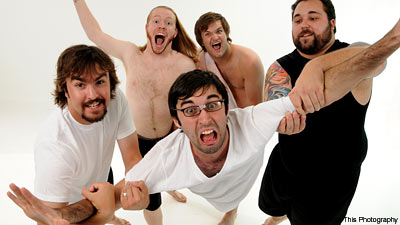 "Well, I wish I could say that we're a like-minded group of individuals with a cohesive vision on what our music should be, but the truth is far from that," Onward to Olympas' bassist Justin Allman told Noisecreep about his band's melodic Christian metal.

A truer statement was never made, as Allman further explains, "Musically, we all bring something different to the table, to form a sort of metal/hardcore/Southern, thrash/death combination. We have classic elements that we feel are dying off in today's scene: solos and guitar riffs you could possibly mistake for an '80's Metallica album, while, in the next moment, we'll include a breakdown or a hook with which you could find yourself remembering days later. We have no intentions on being the heaviest, catchiest or fastest band in existence. We'd rather incorporate all of that into something we can call our own."

In today's crowded, instant-communication landscape, thanks to Twitter, Facebook, MySpace and IM technologies, it's easier for a band like Onward to Olympas to get noticed and signed by Facedown Records. But is the social networking explosion the greatest thing since bottled water? Is it too much? Has it obliterated the mystique of bands?

Allman commented, "Social networking is truly a double-edged sword. We, as a band, would not be where we are today were it not for social networking. Sites like MySpace, Facebook and Pure Volume have been essential in the development of this band and its fan base. No longer do concert attendees check the board outside the club to see who's coming next weekend; rather they check the MySpace. It gives you a much greater reach towards your musical audience. Even if you have no backing at all, kids all around the world are able to hear your music if you network correctly."

But the other side of that sword? The downside? "It does put the band 'out there,' so to speak, in a completely vulnerable light, with no PR to smooth things over," Allman said. "Obviously, due to the fact we just signed, I'm speaking from a local or regional band level, but, when you take advantage of social networking in today's time, you're truly putting yourself, along with the band, out into the world.

"It also seems hard to make the band seem larger than life, like you could even 10 years ago, because it exposes the band as five guys rather than a sort of 'colossal powerhouse of metal!' So we would have to say that social networking has helped us out tremendously and continues to do so on a daily basis, reaching new people all over the world."