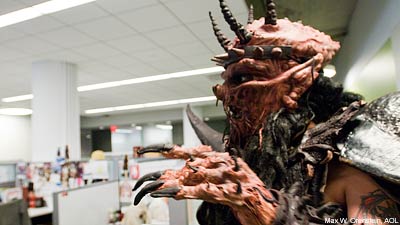 We were all quivering in our boots when Gwar frontman and veritable master of the universe Oderus Urungus descended upon the Noisecreep compound in New York City for this exclusive on-camera interview. Oderus, with his bellowing and booming voice, was delightfully self-aggrandizing, over-the-top, candid, frank and either blissfully un-self-aware or artfully self-absorbed depending on who and on what day you ask. 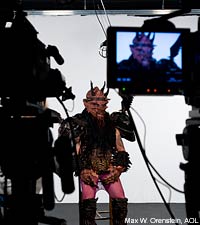 Sporting his 'mangina' codpiece -- which he suggests that every man, including the President, should have -- and a knotted black beard that could rival that of Santa Claus in terms of voluminousness, Oderus spoke candidly and informedly about how his charming, whimsical and erudite personality won him his role as a fair and balanced intergalactic correspondent for Fox News.

He also waxed about how he is the next big 'O' who could take over for the almighty Oprah when she vacates her afternoon talk show post, Gwar's plans to do a Tertiary Tornadoe Tour for 2010, the Tiger Woods media circus and the golfer's future in pornography and Gwar's 'Lust in Space' as a top record of '09. if things don't work out for Obama, perhaps another 'O' could take office in 2013, too: Oderus!