Nails vocalist/guitarist Todd Jones is the sort of musical misanthrope that actually does give a shit. He cares so much about his band's brand of chaotic, grinding hardcore that he recorded the much overdue follow-up to 2010's Unsilent Death album not once, but twice.

"We had to the find the right direction," Jones recently told Noisecreep. "We scheduled time with Kurt [Ballou] at GodCity in May of 2011 with the idea to record a follow-up EP to our last record but when we got into the studio and started recording the songs, we realized that the songs were bullshit. They weren't fucking good and we weren't feeling inspired by them so we ended up scrapping that session."

With Abandon All Life, Nails' forthcoming 10 ten-track plate-o-hate (due in March on Southern Lord), Todd has found that essence rare. It's a massive shot to the dome of blistering grind, shuddering drone and careening tempos – delivered in surgical strike fashion in less than 18 minutes. "Our band was originally meant to be lean," says Jones. "Albums and music shouldn't be judged on length but more on the emotions you feel after a completed listen.

"In November of 2011, we wrote the song "God's Cold Hands," the frontman recalls. "I felt like that was the direction we wanted to go in. It was heavier and a bit more in death metal territory. We're not a death metal band by definition. I was listening to a lot of Suffocation when I wrote that song and it just stuck. The songs started flowing from there. It takes about a year for me to write that much music that I'm inspired by. Not a collection of songs that are half good and half shit."

Nails' scorched-earth, D-Beat sound first came together in 2008 when Jones, a former guitarist with Cali hardcore heavyweights Terror, started writing music he describes as: "Strictly for me. Music that tapped into a real primal, 15-year-old state of mind." Live, Nails is an exercise in unstoppable vitriol.

"I started this band because I still feel that way," Jones chuckles. "I still feel like I'm that 15-year-old that's still pissed off. I'm still angry with a lot of shit. I want to play brutal, primal music, period. I want the vibe and aura of what we do to fit that as well. That's why I feel people do feel some sort of emotional attachment to our songs regardless of how fast they are or simplistic some of the lyrics are."

While Nails (whose line-up is currently rounded out by bassist John Gianelli, drummer Taylor Young and recently added second guitarist Saba) were quick to grab their spot in the hardcore/powerviolence pantheon with the release of their first album: 2009's Obscene Humanity, it was with the band's second album, 2010's Unsilent Death, that made 'em a household name for aficionados of all things extreme. Take note. They may be brutal and bellicose as hell; Jones' steely shower of sonic intensities isn't a one-note deal.

In the public's quest to fit Nails into a nice, neat box, they've been slapped with plenty of tags: some as absurd as "Entombed-core"(along with label mates Black Breath) for the similarities between Nails' pulverizing guitar sound and the legendary Swedish Left Hand Path-sters. "My friend who writes for that blog 'Stuff That You'll Hate' came up with that and I hate him for that," Todd laughs. "We don't sound like Entombed. The only similarity between us and Entombed is the guitar pedal I use – it was the most fucked up sounding guitar pedal I could find at the time."

Bottom line: Nails is a hardcore band in the purest sense of the word. "I'm a hardcore dude, the guys in my band are hardcore dudes," states Jones, 31, also a vet of bands including Carry On and Internal Affairs. "This is who I am, what I know and how I do things. We get love from different scenes including the metal world, but at the end of the day we do things our way. What we do, we do from the heart and I think that's what you get when you see us onstage. People can tell when you're not being that honest and you're putting out garbage music."

Todd does count the likes of Neurosis and Converge (who they recently toured the West Coast with) as kindred spirits and role models. "Converge are our like big brothers. They're not much older than me but I've always looked up to them and they've always looked out for us. Kurt's been recording bands I've been playing in since like 12 years ago. Both those bands are completely self-reliant and do things in a way that they're proud of."

Watch Nails at 'This Is Hardcore' Festival in 2012

While Nails has grown exponentially bigger, so has the list of things they've said to "no" to. "We've turned down plenty of festivals that have lame bands that don't have anything to do with us," says Jones. He has no aspirations of turning Nails into anything but a vehicle for his own personal expression. "We don't want to play with corny pop-punk bands or be aligned with that world. I'm really not that interested in exposing a whole new audience to our sound. I want to play with music that is aggressive and heavy – and not some 'Boys Club' version of hardcore either.

"I got into punk and hardcore because I was an outcast and was fucked up," states Todd, who cites such early '90s influences as Nirvana, Green Day and The Offspring (not to mention a weekly dose of MTV's Headbangers Ball) as the fuse paved the way on his journey to Nails' singular brand of sonic evisceration. "Minor Threat was the band that changed everything for me. I heard the first few bars of 'Filler' and it was all over. When I started going to shows, I realized that here was a place where there were people like me."

From there it was a steady diet of So-Cal California punk and hardcore shows, Jones' first being a 1995 gig with skatecore legends Ill Repute. While Nails' bellicose sounds belie the caustic melodies of bands like the Adolescents and Pennywise, Jones admits that: "The aggression of those bands and all the rage of those of those bands became very influential to my guitar playing and songwriting.

"I don't think we sound like anything from California," he continues. "Terrorizer is one of the top-regarded grindcore bands ever. They were from LA. Slayer is one of the greatest metal bands ever and they were from LA too but they weren't part of a sound or a scene. I don't feel connected to any location or scene. I just wanted to create something that was brutal and harsh. Still, I hope when people hear our band, they understand that there is a huge element of punk rock in our sound."

Current plans for Nails have them hitting the road this spring in support of Abandon All Life with Early Graves and Latino bruisers Xibalba. Be sure to catch 'em when they hit a venue near you, as Nails gigs outside California have become a rare proposition these days.

"We don't want to burn both our audience and I don't want to burn myself out," states Jones. "We're certainly not a full-time touring band but we do want to be out there for two or three weeks this year. I'm married and I've got two kids. I've got to work to support my family and myself and Nails isn't going to able to provide for that. But really, I don't want to tour full time. Too much fucking business. Too many people trying to put their hand in my pocket. Touring with too many shitty bands I don't like. When I tried to make music my livelihood, I hated it. Music is my passion in life, not my business." 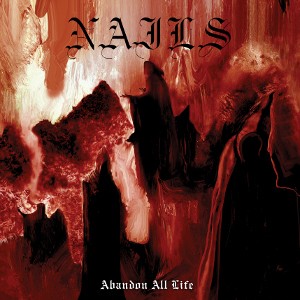 Abandon All Life will hit stores on March 19 via Southern Lord and can be pre-ordered at this link.