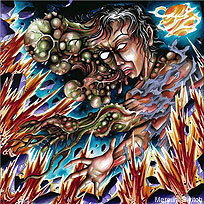 New Hampshire progressive/experimental metalcore act Mercury Switch are back after a four-odd-year silence with a self-financed release called 'Unbelievable.' The road leading to this album hasn't been an easy. With their two-album contract fulfilled with Indianola Records, the band took time out to write more material.

"We took quite a while to write, as we wanted this next offering from Mercury Switch to be light years better than anything we had ever done," Mark MacDonald told Noisecreep. "During this long writing process, we had a lot of label interest -- big and small -- now that we were free and clear of contracts."

Through all of this the band had other issues coming into play: there member changes and financial issues, and MacDonald took time away to play guitar for Austrian Death Machine. "And nothing ever came close to signing the deal," MacDonald said of the label. "A lot of labels loved the sound and progress, yet wanted to hear more 'demos' until the point that they had essentially heard the album. Still nothing!"

Instead of recording demos for labels' ears only, MacDonald and the rest of the band decided cease wasting resource and record an album proper at Verse Media Studios. "Again unfortunately for us," MacDonald added, "between the writing process and recording process, and having a couple memeber changes, this took us a very long time. And like I said we wanted this to be our best: more metal, more rock, faster, slower, more ridiculous, better quality production. Basically everything that we are and more, and maybe even more mature."

With newly mixed and mastered material under their belt, Mercury Switch began the label search again, but with similar results as before. So the band simply decided to release it themselves in a digital-only format. "It is officially out now on most all music formats such as iTunes, Amazon MP3, E-music, Rhapsody, Medianet, Napster, etc. I think this is going to work great since it seems that more and more people are buying on formats like iTunes anyways and don't care about having the actual CD and artwork like the good ol' days."

But don't forget the artwork! The band didn't, as they had tattoo artist Jason Loui throw color for 'Unbelievable.' The band is also working on scheduling shows to promote the release.