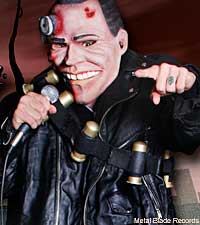 Austrian Death Machine is the Arnold Schwarzenegger-themed, parody side project of As I Lay Dying vocalist Tim Lambesis and his pal Chad Ackerman, who does the Ahhhnold voices. In keeping with the band's concept of building songs around the Governator's beefy movies, ADM is releasing 'Double Brutal,' a two-disc affair, on Sept. 29. That's a whole lot of Ahhhnold! But is two discs too much?

"There can never be too much Ahhhnold," Lambesis told Noisecreep. "I mean seriously, did anyone ever complain when 'Terminator 2' came out because they thought that 'The Terminator' was already enough? Plus, due to the thrashing speed and nature of the non-stop metal assault, both discs together still only come in at an hour of music.

"Our music isn't quite as fast as DRI, but you can probably put three copies of 'Thrash Zone' on one CD because the songs are so short." Ok, he's got a point there. You can't have 'Terminator 2' without the original, and if the music on 'Double Brutal' is anywhere as potent as what we've come to expect, then metal fans will be happy.

'Double Brutal' is obviously twice as brutal as its predecessor, 'Total Brutal.' And not just because of its sheer size. Ahhhnold himself said, "This time you get double the amount of songwriters, because 'Double Brutal' features all of the originals that Tim Lambesis writes, plus a whole disc full of songs written by not-so-girly men like Motörhead and Metallica. Only someone with amazing clout and power like myself could assemble such an amazing team of superstars right? Megadeth is pretty serious sounding, but when you drop names like 'Commando' and 'Predator' from my resume, you see Dave Mustaine cry tears of joy and amazement for being involved."

Lambesis also commented on why he chose to do a project themed around the Governator, linking the metal genre with Ahhhnold's action-film heritage, saying, "I was first drawn to metal for its aggression, energy, massive sound and brutality. Ahhhnold embodies every stereotype there is about metal, and he does it without even trying to be metal. Ahhhnold doesn't have to tuck his camouflage pants into his high-top combat boots to look like he listens to death metal, because Ahhhnold does that anyway while slaughtering an entire island full of people in 'Commando.' That's just one example"

As for Ahhnold serving as the Governor of the Golden State, which bot AILD and ADM call home, the vocalist says,
"I may not agree with all of his politics, but I'm proud he's the Governator of my great sate. Even in the political field, he takes no prisoners with quotes like 'Don't be such a political girly man.' That's probably more straightforward than any other politician has ever been with their critics."