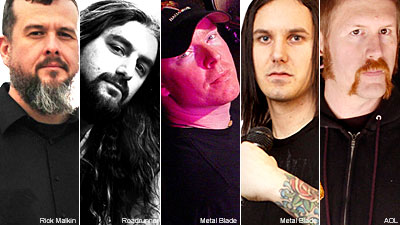 Fill in the blank: Opinions are like ___, everyone has one and most of them stink. Actually, the answer we were looking for was "ideas that are believed to be true." Get your mind out of the gutter. At any rate, sometimes bands want to talk about something other than themselves, so Noisecreep posed some random questions to some of metal's elite to get their opinion on some (non) pressing issues of the day.

Tim Lambesis: We've been getting a lot of requests from our fans and retailers asking us to have shirts that are a little less brutal and a little more neon. Now you have these really, really brutal bands with shirts that don't look brutal. It's almost the opposite of the '80s. I love Iron Maiden, and they're an amazing band, but when I first saw their cover art, I thought to myself 'this band has to be so heavy, they have this Eddie guy and he looks crazy.' I heard their music, and I was like 'where's the double bass and the screaming?'

Jean-Paul Gaster: I can remember when neon was around the first time. I kind of doubt we'll be bringing shirts like those out, but I don't think it's really anything different from a few years ago when people started wearing bell bottoms again. It's just fashion. I'm fine with it, but you will not see me with a lime green T-shirt on any time soon.

Bill Kelliher: Mastodon was doing it years and years ago!

Mike Portnoy: I haven't noticed that, really. I don't go to Hot Topic, so I guess I don't see them as much.

Richard Christy: I guess I'm getting old because I actually haven't noticed that. As long as younger bands are finding way to make money and go out on tour, I definitely support it.

What summer movie are you looking forward to the most?

Tim Lambesis: I'd be in big trouble if I didn't say 'Terminator: Salvation!'

Mike Portnoy: There's two I can't wait for, and both are very different from each other. First, the Woody Allen movie with Larry David ('Whatever Works'), because they're two of my heroes. The other is the new Quentin Tarantino movie, 'Inglourious Basterds.'

Richard Christy: Sam Raimi's 'Drag Me to Hell.' I saw his movie 'Evil Dead' when I was 10 years old and it helped make me a lifelong horror movie fan.

Jean-Paul Gaster: I'm not looking forward to seeing any movies. Every time I go see a movie, you're forced to sit through the previews, and they get worse and worse. As the budgets get larger, the story lines get smaller, and the special effects get more important. I recently saw 'No Country For Old Men,' and thought that was a fantastic movie.

Mike Portnoy: Tour bus. Who the hell wants to be in a smelly van with five people who are been farting all night long and you've got to sleep sitting up? Why would anyone choose a tour van?

Tim Lambesis: Even though we've gotten a lot bigger as a band, we haven't necessarily made tons more money, because when you rent out a bus, your overhead and all your expenses are triple what they used to be. We're definitely making a living and having a great time, but if bands want to make money, they should stay in the van as long as possible.

Richard Christy: I sleep so well on a tour bus. I love sleeping while the bus rolls down the highway. There's something so relaxing about it. Although you can do a lot more fun stuff in a van on your days off, like going to see the lighthouse from the movie 'The Fog,' which I did while on tour with Incantation in 2000.

Bill Kelliher: Since I've toured in both, there's no stepping backwards. I can't get into a van again. We're no Against Me!. They still do that.

Jean-Paul Gaster: Through the 90s, when we were on the major labels, we quickly learned that taking tour support was where it was at. We very much came from the punk scene where you tried to be real smart about the way we did things. We were on EastWest for our first album and touring in a van and trying to save the label money. We quickly realized you've got to spend money to be on those labels, because that's the only way they're going to take you seriously. So whenever there was tour support to be had, we asked for it, and promptly ordered a tour bus. It was always the same thing though. We'd always go out and get tour support for a couple of tours, and they would eventually either yank the tour support or drop the band altogether. So we'd get back in the van for a couple of years and do the whole thing again. We were in a van as recently as ('From Beale Street to Oblivion'). So the van is nothing new to us, we're not afraid of it. In a lot of ways, I actually prefer it because you can get a decent night's sleep at a hotel, whereas in a tour bus, you have to get in your hole, as I call it. I'm grateful to have it, and grateful to have a bus driver, but touring is touring, and I'll do it on a bicycle if I have to.

Your pick for album of the year so far?

Bill Kelliher: I just got the Isis record. That might be up there. What about the Mastodon album?

Jean-Paul Gaster: It's hard for me to listen to a lot of new music. I find a lot of it to be somewhat disposable. I like the new Mastodon quite a bit. I'm also really proud of the record that I did with Wino earlier this year. It was an amazing experience to make that record.

Mike Portnoy: Bigelf's 'Cheat the Gallows' is hands down my pick for the best album of the past year. They're like all my favorite bands in one.

Tim Lambesis: It's shameful to think we're almost halfway through the year, and I don't have a favorite record yet. I want to encourage everyone to buy records, but I don't think I've bought enough records to say what it is yet.