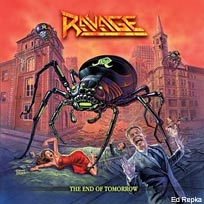 Boston-based melodic thrash band Ravage returns with their newest full length on Metal Blade, 'The End of Tomorrow'. The metal fans who are a bit older might recognize the realistic brushstrokes of famed metal album artist Ed Repka adorning Ravage's cover. Repka has worked with the likes of Megadeth and Death, as well as newer acts like 3 Inches of Blood and Austrian Death Machine.

The cover art features the bright colors and depth of vision seen in much of Repka's body of work, and it envisions the idea of the apolocalypse through an invasion of arachnids. But as with many ideas in the artistic world, the end product differed from the infant concept.

"The initial idea from the band was a silver robot spider on top of a clock tower looking down on frightened people," Repka explained to Noisecreep. "I took that, inverted it, added a 1950's sci-fi movie poster vibe and the required urban destruction. They were great to work with, very receptive of my ideas."