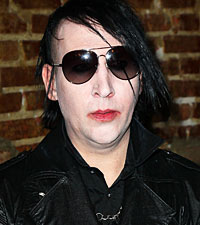 After debuting the Shia LeBeof-directed film 'Born Villain' last September, Marilyn Manson is set to return with his eighth studio album of the same name on May 1st. The album will be the first since 2009's 'The High End of Low.' It will be released via Cooking Vinyl Records in concert with Manson's own imprint Hell, etc.

Speaking of his new full-length to Revolver magazine, Manson commented "It doesn't really sound like any of my old records. In fact it sort of sounds like what I listened to before I made records - Killing Joke, Joy Division, Revolting Cocks, Bauhaus, Birthday Party ... It's very rhythm-driven."

"It's actually very bluesy," Manson continued. It's the first record where I repeat verses. I just sing the words in a different key, the next time. I've never done that before, because I've always felt like I needed to write a lot of words in the past ... I think this will probably be the grandest concept record of all."

In advance of the record release, Manson is trotting out the album's lead single, 'No Reflection,' which premiered on KROQ yesterday. Check it out below.

Listen to 'No Reflection'