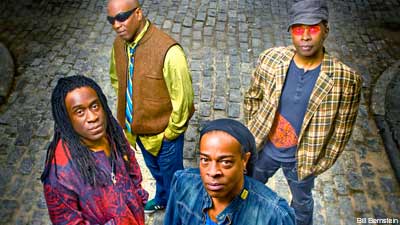 Needless to say, Living Colour has had a long, colorful career -- pardon the pun. And frontman Corey Glover filled Noisecreep in on exactly which bits and pieces were the most colorful.

Rolling Rock
"Being on tour with the Rolling Stones was so surreal. We were meeting these people that you only see on television or in the movies. And the Stones were the best people in the world. They were the nicest guys and understood exactly what we were doing. Jagger got it early on, when other people still didn't get it."

Check Yourself Before You Wreck Yourself
"People forget about all the slogging you had to do to garner some success. Being in a van driving across the country with six other people and your gear, and trying to keep some semblance of sanity in that. One time we got hit by our own equipment van. We were in a passenger van and the van with the gear was behind us, and the brakes didn't work and they hit us."

Mob Scene
"We were in Raleigh, N.C., and I walked into a mall with my hair down. I just wanted to go a Hallmark store to get a birthday card and get some batteries from Radio Shack, and I got recognized and mobbed and it completely freaked me out. There were hundreds of people asking for autographs and some of them just wanted to hang out. What the hell is that? I don't understand that type of behavior. And what was interesting about the success of Living Colour was people recognized you in a particular way. If I had a rasta crown on and my dreads were up in my hat, nobody knew who the hell I was. I was just some other black man walking through the mall."

Party of the People
"We did a gig at some college somewhere, and afterwards we went to somebody's dorm room and hung out with them. It was funny because people freaked out that we were there. The fact is, we wanted to hang out and listen to some music and chill, just like them. And nothing really salacious happened. It's just that we were there. We weren't doing anything strange, but the other people at the party were being strange because of the way they reacted when they saw us."

Wardrobe Malfunction
"I remember we were playing London one time, and I had a pair of jeans that were already ripped. During the show somebody reached up and ripped a hole in my ass. My ass was hanging out onstage, and I didn't really know what to do. I lay down on the floor for a good song and a half before I worked my way backstage to get a new pair of pants."