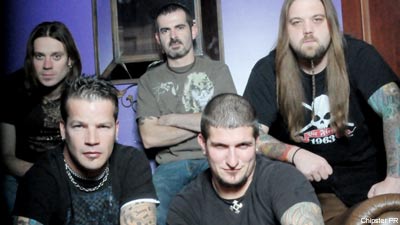 Having just wrapped up dates with Living Colour, New Jersey rockers Sekond Skyn call the experience a learning process. "I think they're all incredible musicians and legends in the industry," bassist George Pond told Noisecreep.

Thanks to those dates, as well as their over of Men at Work's 'Land Down Under,' Sekond Skyn is on the rise. The second full-length overall, 'Addicted to Chaos,' has caused quite a stir thus far, as they recently reached No. 6 on FMQB's 'Most Added' with 28 adds, and No. 6 on CMJ's 'Most Added' with 53 adds. Additionally, Sekond Skyn has appeared on the European compilation, 'Born to Rock 2009' (which also featured such renowned rock names as AC/DC, Kid Rock and Metallica), and have won a multitude of awards and contests, including winning the 'Opening Act Band Search' in 2006 and 2007 for the Family Values Tour.

Calling from Louisville, Ky., Pond said the decision to cover 'Land Down Under' came about organically within the band, which is comprised of members Jon Follet (Vocals), Eddie Heedles (Guitar), Mark Monjoy (Guitar) and Tommy Spano (Drums and back-up vocals).

"Somebody said it and our guitar player, Eddie, took it on his own, put his own little spin on it, came to rehearsal with the lyrics, and handed them to Jon and said, 'All right, we're doing it,'" Pond said. "By the end of the rehearsal, everybody's looking at each other like, 'I can't believe we're playing that, but it sounds awesome.' Everybody seems to dig it. It wasn't something everybody was digging at first. By the end of rehearsal, we were all looking at each other like, 'Holy s---. It sounds great you know.' It worked out."

Meanwhile, the band is performing the songs on its spot dates it has with Cycle of Pain on Oct. 10 in Detroit and Oct. 29 in Asbury Park, N.J.

"JD and the guys that are in Cycle of Pain are no slouches, either," Pond said comparing the experience of opening for them to supporting Living Colour. "Incredible musicians and players and songwriters. We're learning a lot from all of them. Every day is learning experience."