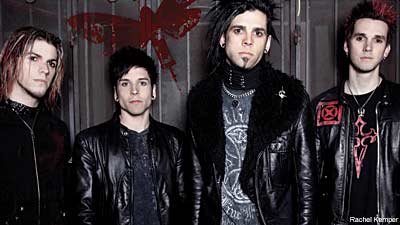 "When you've traveled as far as we have ..." Like a Storm bassist Kent Brooks trails off, thinking of the literal miles he's traveled with his still-young band. "It's not like we lived in L.A. and started a band and showcased for record labels just a half hour drive from home. We were at a fork in the road: either wind it down or go full tilt."

Three of the four members are brothers. The band formed in Auckland, New Zealand and relocated to their current home in Vancouver, B.C. Like a Storm recently played Rock on the Range and Rocklahoma and have toured with Hoobastank, Puddle of Mudd and Shinedown. Some of the fondest memories come from their stint as Creed's opening band.

"It was [Creed's] big reunion tour, it was crazy," Brooks continues, talking to Noisecreep backstage at Rocklahoma. "Our first show in the U.S. was in front of 14,000 people! That was insane. I kind of expected to be nervous, but we were too excited to be nervous. We'd never played to a crowd like that before. To be hit with the volume of the crowd coming back to you ... it was like being hit by a wave. Of course once you get there, you're addicted. You want to get it as much as you can."

The band is continuing the climb up the music industry food chain, continually playing live and shooting videos to support

And yet, with each milestone crossed, the band grows a little humbler, in awe of their good fortune.

Says Brooks, "We wanted to take it by the horns, [so we] moved overseas to have mentors [like] great producers and great bands. You've gotta be thankful people drive the distances they do and buy the CD to support you as a new band."

Of course, that humility is quickly tempered by classic rock 'n' roll attitude.

"It's a 100 percent commitment. If you love it, you throw yourself into it, 100 percent. We believe and we're committed. We'll never look back on this and think it was a waste of time."

'The End of the Beginning' is available now via Prospect Park.