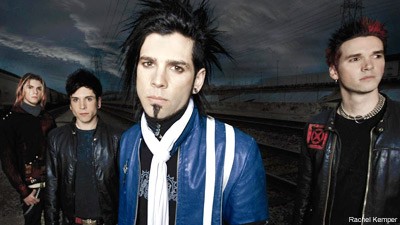 If haven't heard of New Zealand rockers Like a Storm, that's all about to change. You see, Like a Storm is keen on gaining a wide North American audience this fall, when their debut album, 'The End of the Beginning,' lands in stores.

Started by three brothers back in 2004, Like a Storm decided to leave their homeland behind in 2005 for Canada, where they started gigging locally. Kai Marcus of Noise Therapy and Methods of Mayhem caught one of the band's live shows, and was impressed enough to steer them Mike Plotnikoff's way. Plotnikoff, who has worked with the likes of Three Days Grace, My Chemical Romance and Buckcherry, immediately saw something in the band, and started working with them. Eventually, he agreed to produce Like a Storm's debut disc. While it won't commercially available for months, here's a quick taste. Noisecreep presents the premiere of the band's debut single, "Chemical Infatuation," which was helmed by director David Yarovesky.


According to frontman Chris Brooks, he and his brothers, guitarist Matt and bassist Kent, were all playing in other bands when they decided to start jamming together. It wasn't before long that they realized they had great musical chemistry. Soon, songs started growing out of the brothers' practices, and they decided they needed to share their sound with the world. After moving to Canada, drummer Thomas Karanasos joined the group's ranks.

Soon after meeting Plotnikoff, Chris says Like a Storm were moving everything down to Los Angeles where, for 16 months, they lived with the producer, hammering away on the songs comprising 'The End of the Beginning.'

"We started sending songs down to Mike, and he'd ring us up, and go, 'I love the song. Why don't you change this and that?' We had great chemistry with Mike, and he seemed like that other member of the band. One day, he just told us to come down to L.A. to live with him and make a record."

Citing Massive Attack, A Perfect Circle, Nine Inch Nails, Metallica, and Prodigy as influences, Like a Storm consider themselves melodic hard rock, "with a lot of different textures and ambient layers," Brooks says. "We didn't have any rules making the record or writing the songs. We don't really know where we fit, and it doesn't matter. We just want to make music that we love and gets us excited, and music that was can lose ourselves in."

In the video, the protagonist is a man who seduces women, and turns them into drugs, which he later takes, resulting in the hallucinatory experience of making love to his victim. "It's a story about obsession and addiction and being infatuated with something, but also being addicted to it," says Brooks. "I couldn't believe it when he told me. We wanted to make the statement that we're something different. The music we're into is different, the music we play is different. We're so glad the first single is 'Chemical Infatuation,' because we want that to be our introduction to everyone. It's a song we're so passionate about, and its so dark and twisted, yet so energetic. We were talking to different directors, and straight away, he told us his concept for the song, and we were just amazed because we both have this common love for really dark videos, and there aren't really a lot of those out there at the moment."