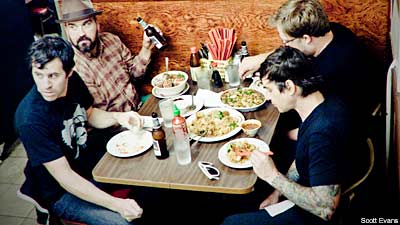 "Living in San Francisco, there's this 'I'm not thinking about it' mentality about earthquakes," Kowloon Walled City vocalist/guitarist Scott Evans explains to Noisecreep. "People buy these incredibly expensive old houses that are built on foundations which have long since turned to sand. It's crazy. When the next big one hits -- and it's when, not if -- all that money is just going to vaporize."

KWC's latest effort, 'Gambling on the Richter Scale,' addresses such concerns, or, perhaps, the lack thereof. Evans seems very nonchalant about the whole thing. "[I]t's weird to have this worry in the back of your head all the time: 'I wonder if my house will slide into the street tonight ...'"

The cover image of 'Gambling on the Richter Scale' depicts, appropriately, San Francisco immediately following the disastrous 1906 quake, which killed more than 3,000 people. "When we all saw [the photo], we were all like 'f---, that's it,'" Evans says.

As with KWC's 'Turk Street' EP, released originally by the band and subsequently reissued by Wordclock, 'Gambling' was tracked and mixed by Evans himself. "We tracked in our s---ty Tenderloin practice space. Basics took about three days, then I did vocals over the course of a few weeks when we had time and the space was available. Greg Thompson mastered it in New York."

And the results are absolutely massive. Thick, chugging guitars, rumbling bass and pounding percussion combine into a dirty, noisy assault. The band is currently previewing a pair of tracks, 'Clockwork' and 'Diabetic Feet,' off 'Gambling' (out Sept. 29 via The Perpetual Motion Machine) at their website.

KWC embodies a true DIY ethic -- not only did Evans track and mix the record himself, but his wife, Bradee, is responsible for the album's package design.

As for when fans or would-be fans outside of the Bay Area will have an opportunity to see the band? "It is almost impossible for us to all get time off of work, so big tours are pretty much out of the question for now. We've talked about flying east and doing a handful of dates with borrowed gear, but you can only lose so much money at a time." And that's a real bummer, because if KWC's live presence is anything near the intensity of their recorded material, a lot of people are missing out.