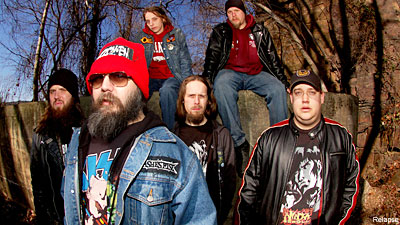 FESTIVALS GALORE: September looks to be a solid month for amplifier worshipers on the east coast and in the midwest. Krug's Place in Frederick, Maryland hosts the 10th annual Stoner Hands of Doom festival the weekend of September 3 - 6. So far, the lineup includes Earthride (!), Blood of the Sun, Las Cruces, Solace, Retrograve (featuring Jeff Olsen of Trouble), Borgo Pass, We're All Gonna Die, Sun Gods in Exile (w/ JL of Ocean on bass), Elder, and many many more.

But wait-- it gets better. Word is spreading fast about a new underground metal festival that's set to take place in Little Rock, Arkansas later that same month, on September 18-20. The still-nameless festival is being curated by Rwake vocalist C.T., who Noisecreep asked for comment. "A lot of us folks from this scene really miss the togetherness of the Emissions From the Monolith fest that Greg Barret used to put on in Ohio," C.T. explains. "We have access to a venue down here in Little Rock-- it's Rwake's home base, kinda like the Legion of Doom. So we figured 'what the hell?'"

DYNAMIC DUO: Saint Augustine, Florida's Dark Castle play a dark and raw brand of doom that sounds exceedingly massive, considering they're a two-piece. Reportedly, Stevie (guitar, vocals) and Rob (synth, drums, vocals) are a couple (Stevie is a lady, in case you're wondering), but the Jucifer comparisons basically end there. Dark Castle's sound is much denser and darker, not to mention more aggressive in the vokill department.

The band caught the attention of At A Loss Recordings via Sanford Parker (Minsk, Buried at Sea) and Philip Cope (Kylesa), who signed them for the release of their debut full-length, entitled 'Spirited Migration' (out May 26). The album was recorded by Cope and mastered by Scott Hull (Pig Destroyer, Agoraphobic Nosebleed) and is the followup to 'Flight of Pegasus,' which was self-released in 2007.

BREAKING DOWN WALLS: San Francisco down-tuned sludge/noise machine Kowloon Walled City are currently at work recording their debut full-length, to be released by Virginia label The Perpetual Motion Machine this summer. Keep tabs on their studio progress at KWC's blog. The record will be the followup to the no-frills quartet's well-received 'Turk Street' EP, which was initially self-released last year as a three song collection and subsequently re-issued by Wordclock with two additional songs. The latter is available on CD, limited 10" vinyl, and as a free (!) download.