With Kowloon Walled City hitting the road soon for a co-headlining East Coast tour with Brutal Panda Records label-mates Zozobra, Noisecreep caught up with vocalist/guitarist Scott Evans to chat about Container Ships and his take on the group's sound and fanbase.

Going through some of your press for this new record, I've seen journalists comparing you to everything from DC post-rock kind of stuff to metal. What are your thoughts on the genre tag thing?

It's a little surprising to see reviewers be so intent on applying a single label to describe a band. There will always be genre bands -- 'this is a retro thrash' or whatever, but probably 90% of the bands I love aren't so easy to describe, unless you use a pretty broad genre. Maybe heavy music has turned into that these days. The way electronic music was a while ago--'Is this progressive trance or is this Chicago acid house?', you know, just because a guy in Chicago found a new way to use a bandpass filter, that created a new subgenre that lasted six months.

Anyway, I don't think our band's music is particularly elusive or baffling. It's heavy but it isn't "metal." That's pretty much what we've always done, even if it's changed over time. We're not the first band to do that.

The thing for me about Container Ships is even though it's heavy as all hell, there's also a catchy aspect to some of it. It might be a bit subtle, but it's there. Am I crazy?

That doesn't sound crazy. Lots of music is catchy. The first song on that last Yob record, 'Burning the Altar'--that song is like 13 minutes long and about 25 bpm, and it has an incredible hook. You hear it once and you can't get it out of your head for two days. I love hooks. It's hard to quantify what makes a good hook so good, but you know it when you hear it. When we're working on songs, we go through tons of ideas, just shitcanning part after part, waiting for the one that grabs you enough to keep it. It's kind of miserable but it's worth it. Maybe that process results in the thing you're talking about.

Listening to KWC, I get the sense that you guys are equipment geeks.

I guess we fall somewhere on the gear-nerd spectrum. On the one hand, our rigs are all very simple--guitar, one or two pedals, amp. We never change guitars, we don't change tunings. Jeff's played the same drum kit his whole life. But on the other hand, Ian [Miller, bass] and Jon [Howell, guitars] and I have gone through a few iterations of our rigs to get them right, and they've changed over time. So we're thoughtful about gear, but everything always stays simple. I like that a lot. With simple rigs you really get to know your gear and how to squeeze more out of it. And your songwriting ideas don't have much to lean on but themselves.

Thinking about it, even when I'm in recording engineer mode, I'm only a minor gear geek. I care a lot more about making a band sound good, and about making rad records, than I do about fancy mics or esoteric outboard equipment. I know a lot of engineers who are incredible gear sluts, but I can't get very excited about that anymore and I don't think you need any of that shit to make a good record.

A lot of people say that a truly great song can be played on both an electric and acoustic guitar, but there's something to be said about distortion and controlling it to create atmospherics. I mean, using it as a textural thing. What's your take on that?

I think they often go hand in hand. You always need interesting musical ideas. Distortion and feedback without interesting musical ideas are probably pretty unremarkable, right? But that still doesn't mean the good stuff will always translate back to an acoustic guitar. Some songs are half about the bludgeon. Some songs are "Guillotine" by Death Grips.

I play unplugged electric guitars all the time, and I write that way a lot. We've had some songs that work really well that way, especially on this new record, and some that do better loud. I do like taking ideas that I came up with unplugged--when you've got nothing but the notes themselves--and playing them super loud and making them work that way. It's cool to approach it from both sides.

I find that bands like KWC are way more appreciated by folks over the age of 25 or so. It's almost like you have to live a little to really connect with this kind of music emotionally. Is that a fair assessment?

I don't know how old all the people are who listen to our music, so it's hard to say. There is that young dude thing where you want everything to be super extreme on its surface, just as loud or fast or brutal or heavy as possible. We don't do that. We never have. Even though our first two records were heavier, we were never trying to reach new levels of brutality or whatever. So to that extent, yeah, maybe you have to want more than pure visceral gut-punch to give music like this a chance. But to be fair, not every 23-year-old is wired that way. There are plenty of people younger than me at a Young Widows show, or Harvey Milk, or True Widow, or Nick Cave or Earth or whatever.

All that said, we are old-ass men. Maybe that naturally comes through and others like us are drawn to it. Like hunched-over moths to a dimming light. 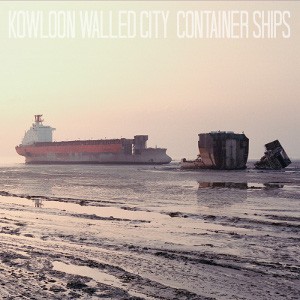 Container Ships is out now via Brutal Panda Records and available here.