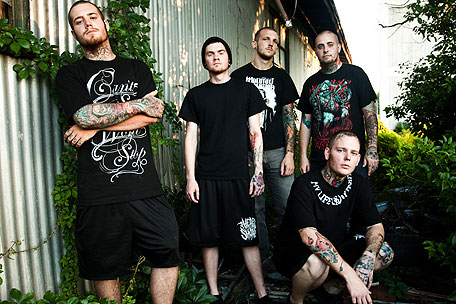 
Every band has struggles; it's all just part of the game. There are seasons of stumbling as a foundation is established, and there are years of sacrifice. Florida deathcore dealers King Conquer are no exception -- especially bassist Adam Whited, who has multiple sclerosis, an inflammatory disease he was diagnosed with when he was 16.

Suffers of MS have periodic attacks where an area of the brain swells, causing nerve cells and the spinal cord to lose communication. Some attacks hit so hard that they cause temporary paralysis.

"The last attack I had was when I was 19." Whited told Noisecreep. "I've had to re-learn how to play guitar and bass twice." It's been five years since that attack. Avoiding another one has not been easy, but the bassist was very determined to not have his life halted again.

His path to current stability has come by a non-medical way. "I tried to keep the best possible mind frame that I could. I was on injections, but it wasn't really helping me. It was making me worse. When I came back around, I changed my diet, my outlook on life. I quit drinking and a few other things."

He credited having a better attitude with making all the difference. "You gotta keep that positive mind frame and not sweat the small stuff."

But even with his MS controlled, he still deals with the results of the last devastating attack. "Still to this day I get frustrated because it's a little bit harder for me than it is the other guys. It takes me a little longer to learn a riff."

On the band's full-length debut, 'America's Most Haunted,' Whited penned the song 'Turmoil Before Enlightenment ' -- hoping people would read into it and discover about what living with MS is like. "It's hard to explain to people I have MS. They're like, 'What the hell is that?' A lot of people don't understand what I'm going through while on tour. But when I finally explain it to them, they're like, 'Wow I don't how you go through that and are still doing this.'"

Even thoug that's a good enough reason to write the song, there was even more to it, too. "I was also attacking people that have a kind of negative outlook on their lives," Whited added, "when really they have nothing to complain about."

Personal issues are normally not the focus for bands that embrace death metal. The norm is to embrace lyrics about serial killers and various incarnations of pure evil. The members of King Conquer, however, wanted the focus to be on the band as a unit -- not gore, which is why each member had to write lyrics for at least one song on 'America's Most Haunted.'

"We want to keep things real," said Whited. "We write songs not just about one thing, but having different aspects." Where one song delves into a political statement, another will be about moving beyond a downtrodden past. "We want someone out there to be able to relate to it -- and if nobody can relate to it, that doesn't bother us."