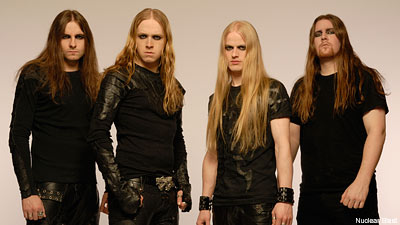 Recording an album is an arduous, careful task. Nefarious Norwegian black metallers Keep of Kalessin are recording their next, as-yet-untitled album at two different studio locations, which guitarist Obsidian C. deems a necessary part of the process and that it does make a difference, especially since he's got his claws immersed in every aspect of the album's pot.

"The main reason for recording the drums in a different studio is because I don't want to have the responsibility for this whole album," Obsidian C. told Noisecreep. "I've written the songs, written most of the lyrics and arranged all the music now. And I will record, engineer and produce all instruments on the album except drums. I feel it's necessary to have someone take some of the pressure from me and help me out with the drums. In this way, I will have more energy and enthusiasm when I start recording the guitars and produce the bass, keyboards and vocals."

Obsidian C. is certainly the master -- or the keeper -- of the Keep of Kalessin keys! Recording in two different locales doesn't change the sound of the record, though. Obsidian C. said, "I don't think it makes that much of a difference, but as I explained, it makes a big difference for me when I'm working on the album. And it's always great to have some fresh ears that hasn't been working on the songs for several months to record some of it and especially do the mix."

He wasn't shy to admit that there have been a few studio horror stories -- like lost hard drives full of tunes -- in Keep of Kalessin's past. "Ha, that has happened tons of times," the guitarist recalled. "Both for 'Armada' and' Kolossus,' we had near death experiences with failing hard drives. Nowadays the system runs much smoother, but you never know. We're better at doing backups now so we're more safe." Obsidian C. also said the band blew out two amps in one day! "It was like lightning shot out of the amps," he said. "I guess it was our experiments with hooking up the amps in series that made them burn out on us. At least we learned what not to do."

The new Keep of Kalessin is due out sometime next year via Nuclear Blast.