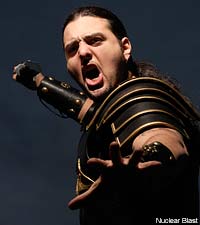 Roman history concept band, Ex Deo, won't be bringing the guest vocalists from their debut album 'Romulus' -- Behemoth frontman Adam 'Nergal' Darski, Nile frontman Karl Sanders and Keep of Kalessin's Arnt Obsidian Gronbech -- with them when they tour the U.S. in November. But frontman Maurizio Iacono (also of Kataklysm) says there will be plenty of other stuff to look at -- everything shy of actors onstage re-enacting Shakespeare's 'Julius Caesar.'

"In the future I would actually love to do something where we have a real theatrical presentation with actors playing the various characters while we perform onstage, but we're not in a position to do that now," Iacono tells Noisecreep. "But we will definitely be bringing the whole Rome theme live, so we want to have decorations onstage and we'll be wearing armor. I don't know if we'll have swords and stuff, because it's kind of an issue to have weapons onstage, but it's definitely going to look like we're going to war."

At this point, Iacono's not sure what bands Ex Deo will be touring with. At the moment, he has several options, but nothing's confirmed and the band wants to make sure the lineup is appropriate.

"It can't be like we do with Kataklysm," Iacono says. "We have to do it in a way that make sense for the project. We're not gonna do a crazy mix up of a lot of bands that don't fit. Also, we're definitely not going to tour as much as we did with Kataklysm. We want this to be a more prestigious thing."

For Ex Deo, the band's visual presentation has always been almost as important as the music, even from the moment the band first started working on songs for 'Romulus' in their rehearsal space.

"The artwork was already done for the album at that point, so we blew up the cover and put it on the wall while we were writing," Iacono says. "And I put pictures of Julius Caesar and artifacts from Rome all over the studio. We even had the series 'Rome' and the movie 'Spartacus' playing with no sound, and when we were writing, the music had to fit the concept that was around us. If we couldn't picture the music in the movie that was playing, then we wouldn't use it. And in the end, the record isn't just like a movie soundtrack. It's really more like a movie with no picture."