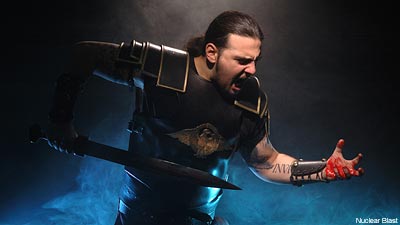 Ex Deo frontman Maurizio Iacono will never forget the night in 2008 when his main band, Kataklysm, played a show in Lyon, France with Aborted and Behemoth.

"While Aborted was playing, the guys from Behemoth wrapped themselves in toilet paper and went onstage looking like mummies," Iacono tells Noisecreep. "That was one of the funniest things I've ever seen. Those guys are always insane."

Behemoth's mental condition wasn't the primary reason Iacono asked their frontman Adam 'Nergal' Darski to perform on Ex Deo's debut album, 'Romulus,' on the track 'Storm the Gates of Alesia.' He was also compelled by the power of Nergal's voice and the content of Behemoth's lyrics.

"I was specifically looking for ... guys that have worked already inside their bands with some historical things," Iacono says. "I first met Nergal in Germany five years ago at an Open Air Festival, and we got along great. We've been friends ever since and we've toured together," which was also a plus."

Iacono asked two other musicians to contribute to 'Romulus,' Keep of Kalessin's Arnt 'Obsidian' Gronbech (on 'Cruor Abbas Nostri') and Nile frontman Karl Sanders (on 'The Final War'). As with Behemoth, Kataklysm enjoyed their time on the road Norway's Keep of Kalessin. "Those guys are just retarded," Iacono says. "They're always drunk and having a good time."

While Kataklysm have never toured with Nile, Iacono and Nile frontman Karl Sanders are fans of one another's music -- and whenever Kataklysm have played Nile's home state of North Carolina, Sanders has tried to show up. "I think the way Nile works with historical facts in their music is the closest to what we do in Ex Deo, so I have a lot of respect for them and was happy Karl wanted to be on the record."

The guest vocalists, who tracked their parts at their own studios, then sent Iacono the parts, weren't the only metal figures involved with the creation of 'Romulus.' Ex-Death and Disincarnate guitarist James Murphy mastered the record at Safehouse Studio in Polk City, Fla. "He's a great studio guy and did a really good job," Iacono says. "Ex Deo definitely isn't a supergroup, but 'Romulus' was kind of an all-star production."