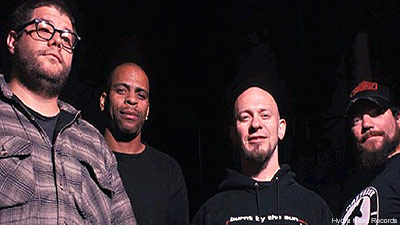 "I was trying to stay current on bills, printing shirts, having bake sales and manning lemonade stands," Keellhaul drummer Will Scharf tells Noisecreep dryly when asked what the band's been up to for the last five or so years. "Drinking beer, pooping, watching TV," he continues. "Playing board games, planting hydrangeas, pulling weeds..." The list goes on.

On August 18, the Cleveland-based progressive post-hardcore acid rockers will unleash their long-anticipated full-length, 'Triumphant Return to Obscurity,' on Hydra Head Records. Earning critical accolades and a dedicated cult following beginning with the release of their debilitating 1998 self-titled debut, the cynical four-piece – Scharf, guitarist Dana Embrose, guitarist/vocalist Chris Smith (ex-Integrity) and bassist/vocalist Aaron Dallison (ex- Abdullah) – have been on an unofficial hiatus since 2003. Rest assured, little has changed. Other than their ages. "We're all pretty dated now," jokes Scharf, when reminded that the band has been around for over a decade now. "It's hard to find room on stage for all the walkers and canes."

Perfection can't be rushed. The appropriately titled 12-track long-player is a logical continuation of 2003's 'Subject To Change Without Notice,' where ingenuity and complexity meet twisted dream sequences and supremacy of the riff. Fuzzed out, occasionally noisy and enigmatically brilliant, Keelhaul's subtle ferocity is as cerebral as it is physically taxing. "I think the title pretty much sums it up," the drummer points out humbly. And while traditionally tongue-in-cheek song titles like 'Pass the Lampshade,' 'Everything's a Napkin' and 'The Subtle Sound of an Empty Milkshake' might hint at a running theme behind the record, the tunes are simply too booming for Scharf to elaborate on. "I have no idea what they're yelling about," he tells Noisecreep. "It's hard to hear back there!"

With a name derived from a brutal form of maritime punishment, Keelhaul took shape long before the concept of "math rock" was sullied by hipsters mistaking blind intricacy for musical vision. Despite scene copycats, Keelhaul – who cite "corndogs, roast beef sandwiches, flat tires, drinking excessively and being broke and old" as major influences – remain singular in their sound. "We don't pay any attention whatsoever to what other bands are doing when we write our stuff," says the former Craw basher. "If it sounds like Dave Matthews, then that's how the song goes. We just put our riffs together and they come out how they come out. And if anybody was cloning us," he adds, "they certainly don't have much business sense. They should be cloning bands that sell more than 10 copies of each release."