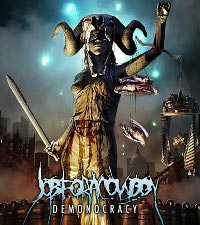 Set for North American release on April 10, via Metal Blade Records, the nine-track album was produced by Jason Seucof (Black Dahlia Murder, Whitechapel, Trivium) who recorded the band's 2009 'Ruination' full-length, at Audiohammer Studios, and features cover art by artist Brent Elliott White. Check out the album tracklisting and a new track called 'Nourishment Through Bloodshed,' below.

Commented the band in a collective statement: "However ruthless an age may actually have been, its style transmits it's music only."

Listen to 'Nourishment Through Bloodshed' From Job for a Cowboy

'Demonocracy' will be out on April 10 via Metal Blade.

Filed Under: job for a cowboy, JobForACowboy
Categories: News
Comments
Leave A Comment
Back To Top