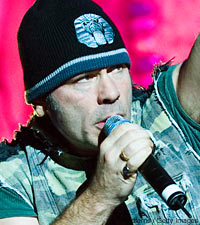 Just three songs into their recent set in Concord, Calif., Iron Maiden's Bruce Dickinson announced that the band wanted to play a new song for the fans from their forthcoming 'Final Frontier' album. And while the song is brand new and the album won't drop until August, Dickinson conceded that most fans in the audience probably already heard it, because they gave it away as a free download. Cheers and applause seemed to confirm his assumption.

But, he said, there's a drawback to having introduced the song to fans as a free MP3. "The problem is that when you listen to it on tiny little headphones, propelled by a battery, on a device made by Steve Jobs and Google, it sounds like s---," Dickinson said. "But the song itself doesn't sound like s---, because when you listen to it in the studio or when you buy the CD, it sounds f---ing awesome. Se we're going to play it for you and it's going to sound great."

And indeed the song, called 'El Dorado,' sounds like a classic Iron Maiden monster live. But we were happy enough listening to it on tiny little headphones propelled by a battery because, well, we can't bring a live Iron Maiden concert with us on the subway each morningj. You can still download the track for free, saving your pennies to catch a show this tour, because it wasn't just the song itself that sounded so great live -- it was the band.