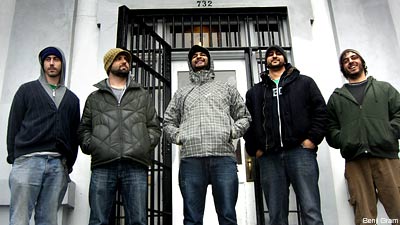 Currently Irepress have plans in the works for their first ever European tour. "We're trying to line up the best time and set up a good package and figure out if it's going to be in the spring or the fall," Guitarist Benji Gram said while updating Noisecreep on the quintet's goals for the coming year.

Recently this forthcoming tour took on another level of excitement as bassist Shan Davé returned from Europe where he was the roadie for fellow Massachusetts band Junius with news that the demand for Irepress overseas was bigger than they had previously thought. "The fans knew who he was," Gram admited as he recalled the stories of fans on some of the daily e-mails the band received from Davé. "All they wanted to know was when Irepress would make their trek to Europe. They were like, 'All our friends listen to Irepress.' It's really cool to hear that they're chomping at the bit for us to go over and put on some amazing show."

Along with news like this, Davé acted as a scout for the band, letting them know other details to help in their tour plans. "It was great to have Shan go over and feel it out over there and see everything from what the trends are with merch and what countries were the best for turnouts. All of it sounded amazing."

According to Gram the band is now hard at work on new material in hopes of premiering it on this tour, but since Gram is new to the band and has only worked on one song since joining drummer, Sheel Davé gave us a bit more insight where he sees the new material heading.

Davé admitted a personal boredom to the longer prog-leaning material that ended up being the centerpieces of the 'Sol Eye Sea I' album. "Since we wrote that record, we've grown up a bit about songwriting," he said. "It's almost like we had forgotten songwriting in general."

Davé feels the true sounds of the band got drowned out trying to fit too much into one song. According to him, the newer material is shaping up to be more concentrated and focused. "It's more hook-oriented and fun to listen to, so you don't have to listen to three million parts in one song," he said in excitement."The way I explain this, I hope it doesn't sound like were trying to sell out, but it's about getting back to songwriting and remembering the choruses we used to write."