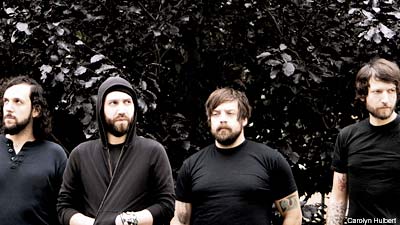 The latest album from Boston's Junius, 'The Martyrdom of a Catastrophist,' is a colossal affair. Musically speaking, the layered tones and textures create a vast soundscape that is as much Isis as it is the Cure. Artistically, both the vinyl and CD versions are packaged in what could literally pass as a coffee table book. Conceptually, Junius looked to the broad mind of controversial scholar and author Immanuel Velikovsky, whose unconventional theories made him a pariah among the twentieth-century scientific community.

"When we first started writing this album, we were looking for a concept to give us direction," vocalist/guitarist Joseph E. Martinez explained to Noisecreep. "Around this time, I was reading some essays on various esoteric subjects and came across one about Immanuel Velikovsky. I knew immediately that it was what we were looking for. I definitely think there is some truth to his theories, but the album really is about his personal life and the struggle he went through trying to get those theories out to the world. The struggle is far more relatable to us than the science."

Guitarist Mike Repasch-Nieves added, "His theories are really fascinating and what's especially interesting about them is the way he reached his conclusions. In a time before technology could easily answer many of his questions, he turned to ancient texts and developed most of his theories using comparative mythology and psychological methods.

"Since his approach was so unorthodox and his conclusions were outside of the established science of the time, the academic community really reacted violently to the guy. As struggling artists trying to do something not entirely mainstream, that struggle is something we really identify with. So, the story the album tells is also pretty personal to us in many ways."

We are going to leave it to you, the reader, to do your own Googling into the story of Velikovsky. Or better yet, pick up 'The Martydom of a Catastrophist' and let Junius do the teaching. There is more than enough there to keep you busy for a while.