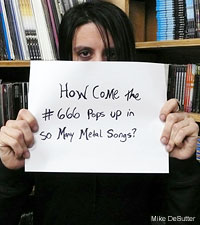 Jory wants to know about the whole "666 thing" that he keeps hearing in so many metal songs.

As any Iron Maiden fan can tell you, 666 is "the number of the beast," which is a really badass biblical way of saying that it's associated with the Antichrist. To paraphrase from the book of Revelations, 666 is the mark of Devil spawn like Damian, the creepy kid in 'The Omen' who could control Rottweilers and babysitters with his mind.

Since Metal has a long tradition of don't-eat-your-vegetables rebellion, getting cozy with the Prince of Darkness has been a popular way to make preppies, parents, priests, and the PMRC wet their pants since Black Sabbath celebrated their first, uh, black sabbath.

Recently, scholars have suggested that the actual number in the bible translates to "616," but unless you're trying to dial Grand Rapids, Michigan, that just doesn't have the same evil ring to it.