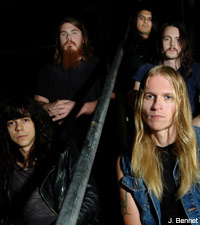 With the thrash metal revival in full swing, it's only fair that other styles get their share of attention, too. With all of the black and death metal bands rising up in the last decade, it's great to see more groups with powerhouse vocalists forming. Although the style has never really gone away overseas, in the States bands with clean vocals were mostly forced to the sidelines during the early '00s. Luckily we have groups like Holy Grail around to remind us why we fell in love with heavy metal in the first place.

The Los Angeles-based outfit specializes in the kind of gritty and melodic songwriting that made early Scorpions and Savatage so irresistible. Formed by ex-members of the like-minded White Wizzard, Holy Grail will be releasing their debut EP, 'Improper Burial,' this month, and it's a scorcher! Noisecreep caught vocalist James Luna while the band was out on tour and asked him for the skinny on the new band.

Though Holy Grail is a relatively new band, three of you came from another group called White Wizzard. What lead to the split?

White Wizzard is a vintage metal band, and it was fun to do because I love old Judas Priest and Iron Maiden. However I and the other guys in Holy Grail wanted to branch out and expand on the classic vibe and write some jams with an all encompassing metal sound.

Does it bother you that they continued White Wizzard with new members?

We have no problem with White Wizzard continuing on. We are two solid, separate bands, and it's rad that they're still giving it hell out there!

When you started Holy Grail, did you have a blueprint of what kind of style you wanted to play in?

Our only blueprint was to keep pushing our own envelope. Whatever song it is we're writing at the moment, we always want to make it faster, heavier, and tougher.

Being that you guys draw heavily from the NWOBHM and '80s sound, was the '90s metal scene a huge disappointment for you?

Commercially, the '90s could be considered disappointing, but there was still great metal being made. Heavy metal never stopped, but it just got more underground in that period. Lots of great black metal came out in the '90s as well, so there wasn't disappointment there.

You will be working with producer Matt Hyde (Slayer, Monster Magnet) on your debut album. How would you describe the material you've written for it?

The material we wrote for the debut album is pretty much the same old heavy metal we've been used to playing but we've added in more catchy hooks, ear-piercing screams, and blazing solos.

What are some classic metal records everyone should have in their collection?

Here's some that come to mind in no particular order:

Iron Maiden -- 'Killers' and 'Number of the Beast'

Diamond Head -- anything and everything

Metallica -- 'Kill 'Em All' and 'Master of Puppets'