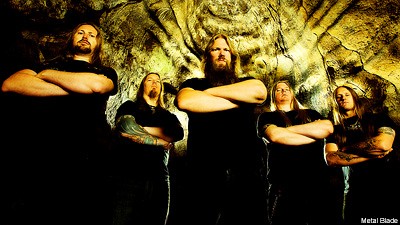 Swords. Mead. Pillaging. Raw meat. Those are the first images that come to mind when we think Viking. Oh yeah, and Amon Amarth, too, since they are the quintessential viking metal band of this century, fusing elements of blackened death metal with old world imagery. It'll be all in a night's work for Amon Amarth, who will launch their headlining jaunt -- dubbed Twilight of the Thunder God II Tour -- on April 8. The tour is sponsored by Noisecreep, so you know it'll be a metallically good time for all parties, onstage and off!

The three-week trek begins in Hollywood and will march across the country, wrapping up in Philadelphia. For this tour, Amon Amarth will get by with a little help from their friends in Eluveitie and Holy Grail. Eluveitie are considered pagan metal, even though they prefer the term 'folk metal,' while Holy Grail are throwback thrash with a decidedly modern feel. So there's something for every metal fan on this run.