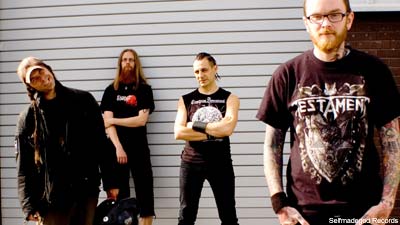 Hellbastard vocalist/guitarist Scruff was incredibly specific when addressing the crust metal band's 2008 'reunion' after a lengthy 'break up.' "The band never went away," Scruff told Noisecreep. "She was merely smoldering in an existentialist jackpot of frustration and direct anger." An ... existential ... jackpot of? Wow, he just said a mouthful.

He continued, "The idea to reform Hellbastard came because of the same reason bands like Amebix did it. Back in the day, you must remember that we had no way of gathering information so fast as we have now, like internet and cell phones. Before the technological explosion, snail mail was the main method bands relied on to get messages across.

"A guy from Los Angeles started a Hellbastard fan site on MySpace and one of my friends showed it to me, as I had no idea it even existed and I saw the massive interest and appreciation for the band coming in worldwide. It was such an honor to see all this interest," Scruff said. While he formed other bands, such as Nero Circus, Sidewinder, Moodhoover and the Dischargers while Hellbastard split in 1991ish, Scruff found members that seemed to be the right people to reboot Hellbastard. "It didn't work out in the end, but all good things come to those who search, wait, search and wait. And here we are," Scruff admitted.

"Here" is traveling across American on their first American tour with an Icelandic drummer, an Italian bassist, a guy from the south of the U.K. and a guy from the North -- the latter being Scruff himself. Stepping back into Hellbastard's worn out boots wasn't easy, either. "I'm like 42 now, not 15," he said. "Things change and life becomes more complicated and, in some cases, more of an everyday struggle. The main problem to get the band up and running was location."

The soft spot for the music remained his motivation, though. "The band has always been an exorcism for me, cleansing the demons, so to speak. When I formed the band back in very late 1984, it was all circumstance," Scruff recalled. "The power-politic had smashed the unions and communities struggled to keep their families fed and watered. [Prime Minister Margaret] Thatcher's Britain had erased the shipyards. Industry was being sold off and raped. Miners had been sold down the line. I was just one of many people that was standing, watching communities being eradicated. Put this with an interest in heavy music and Hellbastard was born. I am the first to admit I am one angry son of a b---- ... for the right reasons."