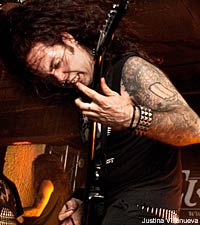 Atakke played a park in August. And they opened for Amebix in February. Yet, the Brooklyn band, which formed in 2006, still remains under the radar of underground extremers you need to watch.

"We're Atakke, and we're from here. Yeah, we live in the club," vocalist Chloe Puke said, after the band was several songs deep into their set. Rhode Island's Howl played just before them, and Toxic Holocaust played after them Sept. 6 at Europa.

Stza Crack (vocalist for Choking Victim, Leftover Crack and Star F---ing Hipsters) was in the crowd, dancing around -- not moshing, actually dancing. Everyone else stood several feet away from the stage, giving a fist thrust to the air every couple of parts, but otherwise way too stoic compared to the energetic bands on the bill. It was an especially strange sight for this kind of metal show.

On their MySpace page, Atakke cite Bolt Thrower and Sepultura as influences. A couple riffs in, and that becomes more evident. With a light show and fogger, a golden fiery backlit the band. "More fog!?" Puke questioned an audience member who shouted the original request for more smokey stuff.

"What are you, getting high from it?" Puke took a whiff before saying, "It's not working for me, man."

If Atakke is your kind of band, drummer Robert Nelson's and guitarist Sam Awry's other band, Mutant Supremacy, might work for a Morbid Angel/Carcass blackened death metal fix. Also, Atakke is playing with Hellbastard on Sept. 25 at Europa and Mutant Supremacy share the stage with Cannabis Corpse on Oct. 3 at ABC No Rio.