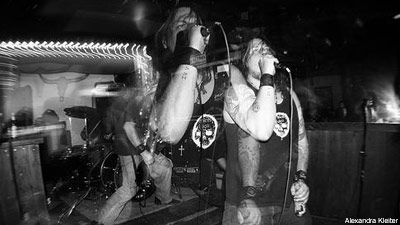 North Carolina sludgemongers Sourvein are gearing up for one hell of a busy year. Currently locked away in a studio somewhere on the wrong side of the tracks, working hard to finish up their next full-length for Candlelight, the intriguingly-titled 'Aquatic Occult' while plotting a split release with Japanese bringers of doomed death Coffins, the band also has several very special live rituals looming on the horizon.

Recently confirmed for the 2010 edition of stoner metal mecca Roadburn Fest, held every year in Tilburg, the Netherlands, Sourvein will be treading the boards of the 013 with Graveyard, Dixie Witch, House of Broken Promises and Southern brothers Soilent Green at the Sunday Afterburner event. Vocalist T. Roy told Noisecreep, "Roadburn starts a huge tour of everything in Europe, the U.K. and Ireland," then went on to reveal that Sourvein have also snagged a spot on doom legends Pentagram's upcoming U.S. tour. "We are on the Pentagram tour for a show in Richmond, Va. on Jan 18. I'm friends with Bobby Liebling and Gary Isom, and we just hooked it up. We love Pentagram! We are stoked and will love every minute of this killer chance.""

So, then, will Sourvein be (dis)gracing the nation with a U.S. tour of their own anytime soon? "Hell yes, like three of them!" T. Roy grins. "We will tour it fully ... everywhere in the world we can to promote our new record."

In addition to screaming bloody gore at the forefront of Sourvein, T. Roy also does the devil's work in sludge metal supergroup Hail!Hornet, which also features Dixie Dave (Weedeater, Buzzoven, Bongzilla), Vincent Burke (Beaten Back to Pure) and Erik Larson (Alabama Thunderpussy, Birds of Prey, Parasytic), several of whom have done time in Sourvein over the years. After a few years of inactivity, it looks like there's trouble brewing down their way once more. T. Roy tells Noisecreep, "It's done. A whole new record, like 12 songs! They are looking to put it out soon. It's mean and fast and nasty."

2009 was a great year for Sourvein and 2010's looking to be even better. What records got T. Roy's blood pumping this year, and what's he most looking forward to in the next? "I am outta the loop this year, but I have a few favorites: Saviours' new one, Shrinebuilder, Grey's new one, the Babehammer demo! Looking forward to new records by Witchcraft, Amebix, High on Fire and Method Man."