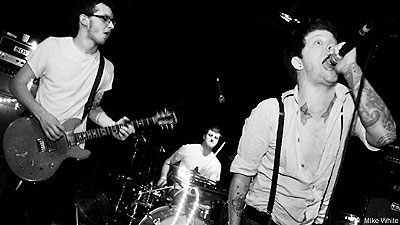 At some point, going to shows became about crossing your arms and live-tweeting as proof you were there. With many crowds only reacting to bands with polite smirks, it makes sense that Hawks have come to exist as frontman Michael Keenan challenges crowds to bring about reckless abandon and remind people that a microphone will always be a phallic symbol.

"Booooring," drummer Shane Patrick laughed as he described to Noisecreep the Atlanta band's first audience. "They were definitely freaked out. They didn't know exactly how to take it," Keenan added. When audiences just stare back at the noise act, you can expect Keenan to raise the bar, even if it may be too far for him. "There was this girl in front row that I was f---ing with really hard. I put the mic between her tits, and she was getting into it, but she was getting freaked out," he recalled, while recollecting one show's chaos -- a show that ended with him swinging naked from the ceiling.

"She was wearing a skirt, and I had my hand by her knee and I was on the ground. She dipped down and she wasn't wearing any panties. I was like, 'Oh, this is going a little far.'" So he did what any respecting southern man would do: take a step back and accept some penance. "I put her boot against my face and mimed her to kick me. She gave me a black eye."

There's intensity to Keenan as he slides off stage and into a crowd, usually disrobing piece by piece -- each song a lost poker hand. This is more than just a set to entertain, it's an invitation to enjoy. It's summer sex with no air conditioning; this is about release with feedback. "Someone said recently that I seem like totally two different people between how I am naturally and how I am on stage," Keenan said. "Honestly -- and this sounds so lame and cheesy -- it's a conscious release of savagery and wanting to molest everyone equally."

He gives a clear warning of how to get pulled in, saying, "If you're a person at our show and you're on a cell phone or texting, you're gonna get f---ed with. I'm personally going to screw with you. Everyone is trying to have fun, and you're just looking bored or not understanding what the hell is going on, you're gonna be f---ed with."

At first many people in the front feel ousted and disgusted having Keenan propel himself at them, groping them as a second instrument. But after a few songs, the former wallflowers begin to let loose. "There was a girl up front just f---ing taking it all night. I kept pulling her shirt open and looking at her tits, and when she would look disgusted I would lean down. I wasn't even thinking about it; it was just happening that way," the frontman recalled. He would then move onto the person beside her. "who just happened to be a dude, and I'd grab his c--- and stick the mic in his pocket and scream into his crotch." And just as soon as he had moved on the blushing girl would come back, leering with an invitation for more.

"Equal opportunity molestation," both members yelled out in unison -- an adopted motto to describe just what happens. "Booze fuels this band quite a bit," Keenan admitted, relaying that the band has learned over time that excess does not make a great show. "Very early in the band we had a meeting after this one really crazy show," Patrick laughed mimicking his slow movements to hit the drums that night. This particular show ended with guitarist Andrew Wiggins receiving a ticket for indecent exposure outside the club. "No more binge drinking," Patrick asserted.

Though Keenan is is a wild man roaming the crowd, it needs to be noted that Hawks are not some sloppy mess. Wiggins, bassist Sean Fitzgerald and Patrick hold a tightness in playing that takes most bands a couple of major tours to achieve. "It's practiced," the drummer smiled finishing a beer. "I don't play drums to suck."

Filed Under: Hawks
Categories: Interviews
Comments
Leave A Comment
Back To Top