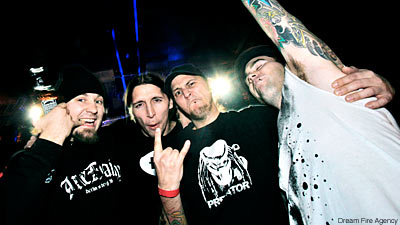 Danish metal dynamos Hatesphere have announced that vocalist Jonathan 'Joller' Albrechtsen has exited the band. He is temporarily being replaced by Morten 'Kruger' Madsen of fellow Danish band Mevadio. Despite Joller's exit due to a priority shift, the band insists it will soldier on with its priorities unchanged.

With Joller now doing what he wants, the remaining members are focused on what they want to do and that's to keep playing metal. Pepe said, "Even though it always takes quite a bit to find a new singer, this was the right thing for us to do. Because the rest of us won't leave the band ... and have never thought about it, either. We are confident that this is what is best for the band, as we have never felt stronger. And as we find a new singer, the future looks bright."

When the band wraps its U.S. tour with the Black Dahlia Murder, they will take a deserved break, as Pepe said, "not only to find the right frontman, but also our guitar player Jakob is having his second child around May." The band will return to the U.S. later this year. Pepe finished, "For many years to come, we will be around to annoy you for sure! Hell yeah!"