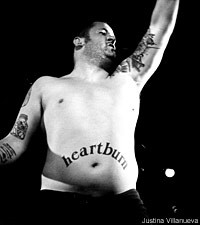 Michigan's the Black Dahlia Murder are probably in the top 10 of funny metal bands in the industry today. Their tour DVDs exhibit that -- with the band pulling pranks all over the world. Their sense of humor likely keeps them sane on the road. And a band that tours as relentlessly as BDM needs all the sanity they can conserve.

Just before they head over to Australia and New Zealand with Unearth, Noisecreep got a chance to talk to frontman Trevor Strnad about the ink on his stomach and the band's tour accomplishment's this year.

Tell me about your 'heartburn' tattoo. What was the inspiration? When and where did you get it done? Was it an artist you've worked with before?

I get a lot of heartburn. Pretty much everyday. It's a tribute to my master! At the time, we talked about doing it in the Hatebreed font ... would've been f---ing hot! I got it done during a day off a winter tour in late 2004. I remember that I went into Taco Johns afterwards with my belly hanging out of my shirt all covered in plastic wrap. [It] must've been a funny sight. I honestly don't remember the guys name that did it. It was a free tattoo from our friends at Skibo's in Cheyenne, Wyo. I also have a health-book style diagram of a heart on my right arm that the guy did a few months prior to the stomach rocker. I looked up Skibo's website, and I don't think he works there anymore. At the time I had no idea how 'famous' the tattoo would become. I still like it and I'm glad I have it.

Who in the band is responsible for getting Black Dahlia Murder, Obscura, Augury and Hatesphere on the same bill, at all those small clubs you guys played?

It was a combined effort of Brian and myself. Hatesphere was his idea, Obscura and Augury were mine. We've been trying to play with Hatesphere for a long time. We've been friends with them for a couple of years now. It was a really good lineup, and I think a lot of our fans were surprised and impressed by the other bands. It's a lot more fun for us to be touring with bands we would actually listen to.

How was the Mexico City show?

Mexico City was really fun. The venue was super nice and the kids were out of control. The show the next day was horrible. The turnout was decent, but the conditions were the complete opposite. Playing in Mexico is a gamble, as far as equipment goes.

Have seven or more years of arduous touring taken a toll on you, physically and/or emotionally?

Yes. I think it has had its toll on everyone. People out there don't realize how hard it is to live in a van. Most of the people reading this would buckle under the rigorous schedule that we have upheld to this point. We are grizzled, war-hardened touring maniacs, and you are complete pussies that live at your mother's house and talk s--- on the Internet. Know your role!