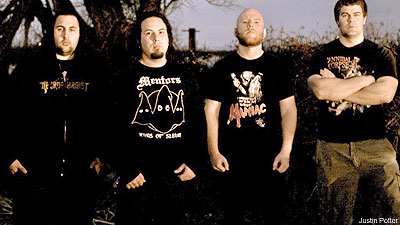 When fans of California's Brain Drill lay ears on the band's new LP, 'Quantum Catastrophe,' which drops May 10, they're going to notice that the band has unbelievably boosted the technicality of its unique brand of death metal. And according to bassist Ivan Munguia, that was totally and utterly intentional. On their new record, Brain Drill are a band with something to prove.

"I think it was just Dylan, because he just wanted to outdo himself from the last record, especially since we don't have the same members and a lot of people were like, 'How are you going to be able to pull it off without [former drummer] Marco [Pitruzzella] and [ex bassist] Jeff [Hughell]?,'" says Munguia. "So, Dylan was like, 'F--- you guys, I wrote everything.' And he threw it back in people's faces. He really wanted to try to outdo himself on this one."

'Quantum Catastrophe' is a sinister disc that rips like Black Dahlia Murder meets Cynic, and, while not a proper concept LP, the disc does contain a lyrical theme thanks for frontman Steve Rathjen: The destruction of humankind in the year 2012. And Brain Drill can't wait to get out there and play the thing live. But, so far, they've got no touring plans and they're still trying to sort some things out for this summer. In fact, if Sharon Osbourne is listening, Munguia says the Drill wants on this summer's Ozzfest revivification. "Unless someone considers that selling out, but who gives a f---," the bassist explains. "We'd do Ozzfest any day."

If they do end up landing a spot on Ozzfest, it would mark a triumphant return of a band that nearly collapsed a few years back. In short, the band was on tour and was stopped crossing the Canadian border. That would have been fine, had some of the members not been carrying. Does that mean everyone in the band is drug tested monthly? "Its just common sense that you don't bring a fat sack of weed on a van when you're getting pulled over all the time," the bassist says. "Let's leave it at that. Every thing in the band is great. We have a more solid the lineup, and everyone is mellow in the band."