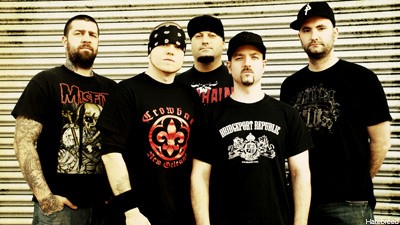 Hatebreed won't skip a beat this summer. On Rockstar Energy Drink Mayhem Festival off dates -- that's industry-speak for days when the band doesn't have a Mayhem Fest tour date -- the band will play shows and fill in the gaps with Lamb of God and 3 Inches of Blood. There's no rest for the metal wicked this summer, as the 'Breed will be headlining the second stage of the entire Mayhem Fest as well.

The band is also wrapping up a new video -- filmed in Vienna, Austria, during their world tour with Machine Head -- for 'Everyone Bleeds Now,' taken from their self-titled album, released in September. You can also check our exclusive video interview with frontman Jamey Jasta from around the album's bow.

More off dates will soon be announced, but the first batch of tickets will go on sale March 26 through Ticketmaster. The initial run of dates are below: