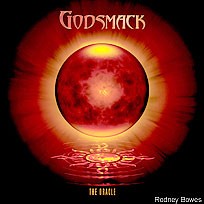 After a four year wait for another studio album, Godsmack fans' desire for a new album will finally be satisfied, when 'The Oracle' releases. They've released the first single from the new album ('Cryin' Like a B----!!'), for sale on iTunes in the beginning of March. They will also be headlining Rockfest 2010 in Kansas City and Rock on the Range in May.

Until May 4, the release date for 'The Oracle' rolls around, Noisecreep is tiding you over as we present the album artwork and track list for the Boston-based band's fifth effort.

'Shadow of a Soul'