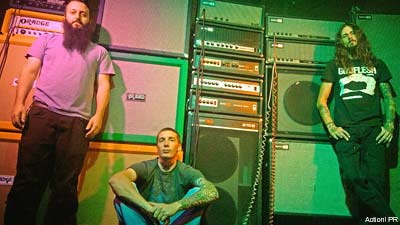 Power trio Zoroaster, who are currently recording their new album 'Matador,' earned the title of Atlanta's loudest band for quite an obvious reason: they play really f---ing loud! "The 'loudest band in Atlanta' thing is something we got tagged with from the early days, when all we cared about was drowning out the hecklers and it was 'full on 11' all of the time," vocalist/guitarist Will Fiore told Noisecreep.

But the band has grown up a little -- without turning the amps down. "These days, we're actually concerned about sounding good as well as being loud," Fiore said, adding a warning that "if you decide to see Zoroaster live and not bring two pairs of earplugs, don't hold it against us the next day!"

Ok, deal! We'll stuff an extra pair o' plugs in our pockets. But regardless, we could never hold it against the band because their unorthodox, exciting take on metal -- which has earned them comparisons to mammothian bands like Godflesh, Sleep and the Melvins -- is designed to be played at maximum volume, and the loudness is a metalhead's accepted occupational hazard.

"With this upcoming new record, 'Matador,' we've got some more refined tunes than we've had in the past," Fiore revealed. "The songs are more 'songs,' and they're really going to light some people up. Prepare for an avalanche of big-sounding, rocking intensity!"

Zoroaster are currently holed up in the Atlanta's Living Room Studios. 'Matador' is due out in July via E1.