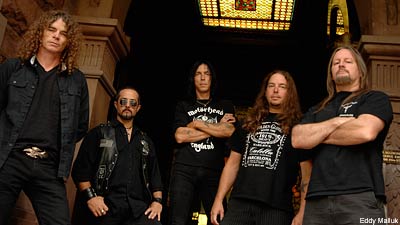 New Jersey's seasoned thrash warriors Overkill are getting ready to launch the North American Killfest Tour, which features Overkill, Vader, Warbringer and Evile. The tour starts in Philadelphia on April 1 and runs through April 30 in Springfield, Va.

Last year, Overkill launched the first Killfest in Europe with Exodus, Gamma Bomb and Torture Squad. The dates were so successful they decided to take the concept to North America. "We coined the phrase based on [the fact that] it's been done before," vocalist Bobby 'Blitz' Ellsworth told Noisecreep. "'Kill' and 'Fest' sounded good together."

For fans of thrash and death metal, Killfest is a real feast, bringing together classic acts from the '80s and '90s and new bands influenced by their forefathers. And for Overkill, who already have relationships with most of the groups on the bill, it was pretty easy to pull off.

"We talked awhile ago to Vader about getting them on this tour," Ellsworth said. "Loved the record, loved the new Vader record. Had already toured with Warbringer, done some festival shows with Evile, so I know all these guys personally. So in our opinion this is kind of a good mix of having the old and the new. Having us being the old and Warbringer being the new and the others in between. So I think it's really a good presentation of where the scene is today with regard to how long it's lasted and how fresh it is with some of the newer bands. So I think it's going to be a good presentation."