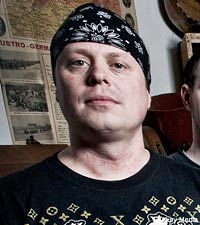 While Earth Crisis are a vehicle for the straight edge and animal rights issues that the members so steadfastly believe in, vocalist Karl Buechner takes a different lyrical track with Freya, choosing to be much less pointed. But his political stances do creep into Freya in a subtle way.

"It crosses over a little bit," Buechner told Noisecreep. "'Down to the Last' is about species becoming extinct due to man, while 'Struggle to Survive' is about vivisection, but what made these Freya songs different than Earth Crisis songs was the angle that I took, trying to describe what these experiences are like for the animal's perspective, rather than the point of view of outside observation. It's more creative, hopefully. With Earth Crisis, we are forwarding our vegan and straight edge beliefs. Freya is a different kind freedom, to explore the past or speculate about the future. It provides a nice balance for me as a lyricist."

While Earth Crisis were the torchbearers of animal rights issues during their mid-90s heyday, the scene has changed and died out a bit as we've hit 2010. Buechner has a more positive viewpoint, though. "There are bands like Parasitic Skies, Maroon and Nueva Ethica," he said. "There are a lot of great bands out there promoting animal rights. It is easier to be vegan now, too, since there are more restaurants and grocery stores." Buechner is now 38 and has been a vegan for 20 years.