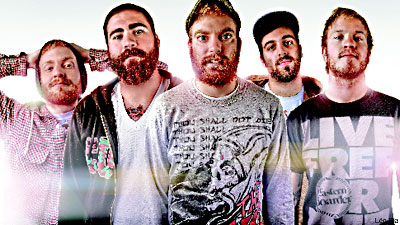 On a quick listen, Four Year Strong seems like a band not to be covered on Noisecreep. The Worcester, Mass band plays catchy, hooky, and oh so poppy songs -- but they also flood those melodic moments with thick constructed hardcore. Many find this mix confounding, but the band feels the total opposite. "What we've always liked about being in this band has been the ability to float between two worlds," admits guitarist/vocalist Dan O'Connor. "We've done super hard heavy tours, and we've done super poppy tours."

O'Connor explained that he's seen the band's crisscrossing sound as an advantage over the years -- they always make their mark on those tours. "It's a weird line to walk, because people definitely don't understand why you can't just pick which direction to go in," he pointed out. "But that's the thing; we don't want to pick a direction. We all like lots of different kinds of music and have lots of influences and we like to put them all in the band."

Both O' Conner and Alan Day (guitarist/vocalist) grew up in '90s hardcore scene of Boston and their roots show in every Four Year Strong song. "That's how we learned to play guitar so when we approach writing songs we are very riffy. We like to have the guitar parts real metally and moving all around the vocals. We think metal kids can grip onto that and poppier kids usually grip onto melodies."

On the band's newest album 'Enemy of the World' producer Machine helped the band stay grounded to those roots. "He approached it more of a rock record as far as producing and song writing goes and then we had John Feldmann mix the album -- who put a mix of a hard rock sound and a poppy polished sound. Everything just worked together really well."

Over the years, the band has received more questions than actual criticism on why they just won't go all the way pop or fully enter the pit of hardcore. "We want to mix them together," O' Conner emphasized. "It makes for a funner record and a way more fun show. We like that our band sings opposed to being a screamer band."

To further add to why the band is the way it is, he offered the truth of where himself and Day first discovered their love of singing. "We were both in choirs growing up in high school, so we love harmony. We like to play around with melodies and harmonies; it's one of the things fun to us."