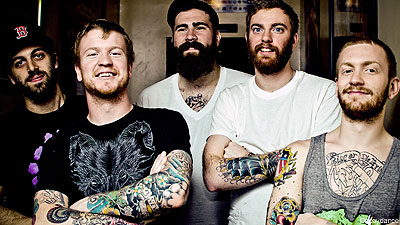 Did you expect something heavy-hearted and serious from Four Year Strong for their latest video? If you did, then you really just don't get the melodic hardcore outfit. They are a band about the good times, and we here at Noisecreep are very proud to premiere a behind-the-scenes look at 'It Must Really Suck to Be Four Year Strong Right Now.'

Filmed in London, this newest video captures the fun relationship between the smiling fivesome and their fans, in a 'Warriors come out and play' style, of course. "This was a really fun video to make, and all kids who showed up were awesome," vocalist/guitarist Dan O'Connor told Noisecreep of the decked out costumed fans focused on. "They were all troopers and put in a lot of work to make it happen. There's no one like our fans."

According to director Robert Rafalat, cars almost hit a few fans, and if you watch you can see what happens when the band gets in the moment destroying a fan's 'Guitar Hero' guitar. Money was owed.

Four Year Strong are on the road all summer on the Warped Tour.