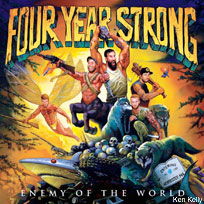 "It's kind of a take off of old romance fantasy novels that make us all looked ripped and hilarious looking," Four Year Strong vocalist/guitarist Dan O'Connor described to Noisecreep the band's cover for 'Enemy of the World.'

The initial idea for the band's third album not only came four years ago during a session for their previous full-length, but when everyone joked about how it would look to mimic the movie poster for the Chevy Chase classic 'European Vacation' -- like the hulked-up Chase from the 1985 film's promotional art, all band members standing on top of a mountain with pecks glared -- it all came together.

The band began their search for the perfect artist for their satirical vision with sci-fi film and book artists. "We talked to some dudes who do 'Star Wars' art and stuff like that, and they were super cool, but they were retired," recalled O'Connor. "Then we found out about Ken Kelly, who did the Manowar art, and a couple of friends who we were on tour with said he did [Coheed and Cambria's] art, so we checked it out."

The band was nervous on whether the artist, known also for his work on the classic Kiss covers for 'Destroyer' and 'Love Gun' as well as 'Conan the Barbarian,' would even take up their project; they got lucky. "It turned out he already knew of the band and was super stoked to do it," O'Connor said.

From there, they began sliding Kelly their notes, which of course included what each member was to look like and what kind of weapon they would boast. "We described each person. We wanted me to be some big dude just throwing rocks," O'Connor gleamed. "[Drummer Jake Massucco] was like, 'I want to look like a dragonfly holding a musket wearing a loincloth.' [Keyboardist Josh Lyford] was like, 'I want to have some wolves around me, and I want to be holding a bowie knife.'"