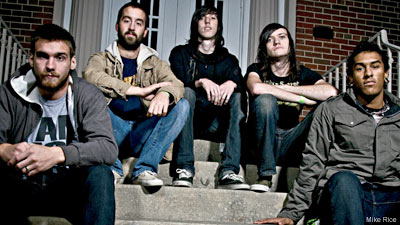 The bread a butter of any metal band is touring. It's self-advertising at its pinnacle and the primary way to move new albums, merch, and establish a fanbase. It is a fun time at most points, can be a hassle and even dangerous here and there, but it's always an adventure - a financially risky adventure.

So it makes sense that bands would minimize travel costs wherever possible, especially in a questionable economy. For Today, it seems, has it down to a science.

"There was this super sale at airlines to Australia [an airline] put up for seven days," said David Morrison, For Today's drummer and manager. "And we got round trip tickets at half the cost of what they usually are to Australia. So we're like, 'Yeah, let's go to Australia!'. So I contacted some agents and got everything set up in six days, and bought tickets."

Touring halfway around the world is pretty ambitious for a young band with only one album under its belt, but it's not the first time they've played outside of the U.S. The band played Mexico last year, and there are plans this year for foreign dates. "We're flying to Costa Rica and hanging out there for a couple of days and playing a show. Then flying to Panama City and playing a show. Then we fly back."

Stateside fans should not be troubled; in June they will be doing a midwest tour in support of their new CD, with Beneath the Sky and Venia, followed by a full run with the Scream the Prayer Tour.


Download For Today Songs
Filed Under: 753965, For Today, ForToday
Categories: Interviews
Comments
Leave A Comment
Back To Top