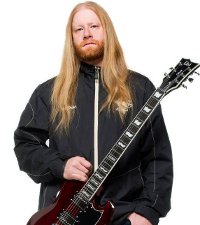 The 35-year-old is taking up the bass in long-running metal machinists Fear Factory. DeVries replaces Byron Stroud who was a member of the band from 2004 till early 2012 when he left to play bass in 3 Inches of Blood.

While the Fear Factory's new album, 'The Industrialist,' is currently in the mixing phase, DeVries is looking forward to hitting the road with Burton C. Bell and Dino Cazares, who called him "a perfect instrument in the FF machine." While DeVries hasn't heard the new album yet, he is over the moon about receiving the call to become a member of one of his favorite bands. Dreams do come true in the metal world.

Noisecreep exclusively spoke with DeVries after the news of his high-profile new gig was announced. He was gracious as he bowed out of his role in death metallers SFU and even had props for his replacement. What a classy guy!

Yes. But the decision to leave Six Feet Under was extremely difficult, especially having come up in the industry with Chris Barnes as one of my musical inspirations. They are all very close friends, and I loved every minute of touring with them. Their new record is f---ing brutal - a true return to form - and their new bassist, Jeff Hughell, is sick! They're going to do great things this year, and I wish them nothing but the best.

As far as Fear Factory is concerned, that was simply an opportunity I couldn't pass up. I've been a fan since I was 15, and was honored when I got the call from Dino. There's a lot of touring already planned for around the world, so get ready!

What is the one thing you are most looking forward to about being in Fear Factory?

Playing the Fear Factory tunes we all know and love on stage, touring the world once again with great friends, and meeting some amazing fans!

Can you refresh us on the circumstances of your leaving Chimaira, since you were SUCH a part of the band for so long!

Leaving Chimaira was another tough one. A decade is a long time, and I hope people can truly appreciate that statement. In the end, it was my time to move on. I had achieved everything I set out to accomplish with Chimaira, and felt the need to explore other options as a musician, for my own personal creativity, as well as my growth as an artist.

Do you think you'll get a chance to write music with Fear Factory? Have you heard any of 'The Industrialist' yet?

I haven't heard any of the new album yet, but expect that I will when I'm in L.A. this April to rehearse with the band. As far as writing goes, who knows? It'd be great, but right now, I'm just focusing on getting strapped into the live process, and delivering a killer show.

What made you want to join Fear Factory? Anything specific?

Fear Factory is a band I still listen to, to this day, going on 20 years strong. They had a huge impact on my writing, and it's a band that people want to see on the road. I'm really excited to be part of the movement.

You've lived on the road for a long time. What are the best and worst things about it at this point?

Worst thing? Missing my family. Having kids definitely changes everything, so it's hard to leave. But it's what I do, and what I do best, and I'm fortunate they understand. The best things about being on the road? Having been lucky enough to see the world and share the stage with so many amazing musicians and bands. Download Festival - playing in front of 60,000-plus people - was a rush! Can't wait to do it again!